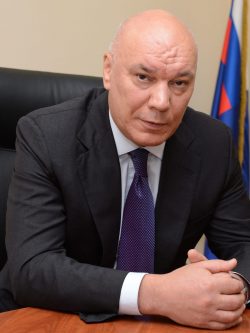 KORNIENKO, Gennady Alexandrovich (b. 1954) received a higher technical education but does not advertise where exactly. Since 1981, he served in the KGB and later in the FSB, was a member of the Communist Party. In the 1990s, he belonged to the so-called Karelian clan of the security servicemen (siloviki), led by Nikolai Patrushev, a close friend of the then vice-mayor of St. Petersburg, Vladimir Putin. After Putin headed the FSB, Patrushev was appointed head of the M department, which was responsible for overseeing the law enforcement agencies, and Kornienko moved to this department. In 2001-2002, he was deputy director of the Federal Security Service of the Russian Federation. In 2002-2012, he was the Director of the State Courier Service of the Russian Federation. On June 26, 2012, by decree of Russian President Vladimir Putin, he was appointed director of the Federal Penitentiary Service (FSIN). On September 30, 2019, he was relieved of his post as director of the Federal Penitentiary Service due to reaching the age limit for tenure.

It was during the time of Kornienko’s work in the “M” FSB department that a special operation was carried out to dismiss the then General Prosecutor Yuri Skuratov, which contributed to raising the profile of the new FSB director Putin in the eyes of Yeltsin’s entourage. When Kornienko headed the State Courier Service, there was scandalous detention of Oleg Rybalkin, deputy head of the Federal State Unitary Enterprise “Main Center for Special Communications,” who was accused of embezzlement of 19 million rubles using his connections with Kornienko. However, in the end, the charges against Rybalkin were dropped, and he headed the state center of special communications.

In 2012, Kornienko headed the Federal Penitentiary Service, one of the most corrupt agencies in the country. Under the new leadership, the department did not become more transparent. A year after Gennady Kornienko joined the agency, an audit of the Accounts Chamber recorded financial violations of 7 billion rubles there. And by 2016, the Kornienko department became the sixth largest budget money spenders among all ministries and departments. Rosfinmonitoring found out the loss of 1.2 billion rubles allocated for integrated security systems (ISS) for correctional facilities of the department. As it turned out, companies associated with the shady businessman Vyacheslav “Mzhelya” Mzhelsky handled the right to supply ISS in several regions. Commercial entities registered with Mzhelya’s son actively participated in the department’s tenders and received multi-million dollar contracts for the equipment of the jails and penal colonies.

There were other corruption schemes too. So, the Federal Penitentiary Service (FSIN) placed orders for tailoring uniforms at prices that were at least 1.5 times higher than average market ones and then bought the same items that were produced in their own penal colonies from dealers. The beneficiaries were the former State Duma member from United Russia, the member of Delovaya Rossiya, businessman Vladimir Golovnev, and Magellan company, the permanent winner of tenders of the Ministry of Internal Affairs and the Ministry of Defense, belonging to Elena Agafonova. According to a similar scheme, the uniform went to both the Ministry of Defense and the Ministry of Internal Affairs. At the same time, product prices significantly exceeded the cost. As a result, about 722 million rubles flowed from the budget.

All this commerce was carried out by the hands of convicts, whose remuneration did not exceed the minimum wage. Only according to official statistics, 65% of the equipment in the penal colonies has long worked out its term, but the agency’s leadership decided to save on updating it. At the same time, convicts managed to produce goods totaling more than 30 billion rubles a year, almost half of which was for domestic needs. However, the prices for FSIN's own institutions were strangely much higher than even for commercial organizations. So, for example, electric bakeries assembled by convicts were sold to the agency’s branches for a price of almost 42% higher than to other state institutions. The Accounts Chamber registered violations related to food purchases in the penal colonies. According to its estimates, only in 2013, an unreasonable price increase for agricultural products at FSIN enterprises led to inefficient spending of budget funds totaling 3.8 billion rubles.

Soon after Kornienko became the head of the Federal Penitentiary Service, prisoners in correctional colony No. 6 of the city of Kopeisk, Chelyabinsk Region, went on hunger strike, demanding that the colony administration stop torture, beatings, and humiliations, as well as extort money from prisoners' relatives for “good conditions of imprisonment.” Of the latest scandals surrounding his department, one can recall the video of 2018 with the torture of a prisoner in the Yaroslavl penal colony and shots from the Amur penal colony No. 3, where Vyacheslav Tsepovyaz, a leader of the Kushchevka gang, freely moved around the territory of the colony. Under Kornienko, the number of murders in the Russian prisons increased, which he had to admit. Russia continues to lead in mortality rates in prisons in Europe. The FSIN in Putin's Russia is an almost inexhaustible market for state contracts and a resource of cheap forced labor.