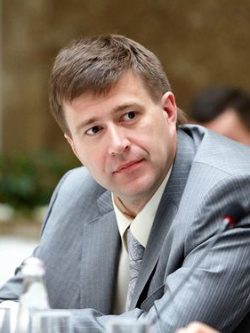 KONOVALOV, Alexander Vladimirovich (b. 1968 in Leningrad) graduated from St. Petersburg State University with a degree in law in 1992. One of his professors was the future Prime Minister and President Dmitry Medvedev. In 1992-2005, he worked in the prosecutor's office of St. Petersburg. In 1993, he was an assistant to the prosecutor of the Vyborgsky district, and in 1993-1994, he was an investigator in the same district. In 1994-1997, he headed the department of the city prosecutor's office for supervision of the enforcement of laws on federal security. In 1997-1998, he served as deputy prosecutor of the Moskovsky region, and in 1998-2001, as a prosecutor.

At the same time, Konovalov received an Orthodox theological education in absentia at the St. Tikhon Orthodox Humanitarian University. In 2001, Konovalov was appointed deputy, and then the first deputy Prosecutor of St. Petersburg. At that time his old acquaintance Nikolay Vinnichenko became the Prosecutor of the city. As deputy Prosecutor of St. Petersburg, he participated in the investigation of a few high-profile cases and trials, such as the case against the governor of the Nenets Autonomous Okrug Vladimir Butov and the case against the president of the Euroservice corporation Konstantin Mirilashvili, who had been charged with kidnapping and murder, which Konovalov dropped.

In 2005, Konovalov’s patron, Vinnichenko, was appointed director of the Federal Bailiff Service. Following him, Konovalov was appointed Prosecutor of the Republic of Bashkortostan, where he led the investigation of the beatings of citizens by riot police in the town of Blagoveshchensk and the illegal privatization of the Bashkir fuel and energy complex by President Murtaza Rakhimov and his son (the case was closed). From November 2005 to May 2008, Konovalov served as plenipotentiary of the President of the Russian Federation in the Volga Federal District. On May 12, 2008, Konovalov was appointed Minister of Justice of the Russian Federation. Since January 31, 2020, he has been a Plenipotentiary Representative of the President of the Russian Federation in the Constitutional Court.

Ex-Minister of Justice Konovalov is a team man and a very accurate executor, who avoids scandals and conflicts. During Medvedev’s term in office, he was considered one of the “liberal” reformers in the government. At that time, he tried to clear the image of the ministry as a punitive body, starting with the reform of the penal system, decriminalizing economic crimes and articles on insulting and slander. When Putin returned to the presidency, the settings changed, and Konovalov unquestioningly followed the new instructions, and, therefore, participated in the execution of the punitive functions of the Putin regime.

It is the Ministry of Justice that regulates NGOs and, in particular, enforces the inclusion of NGOs in the infamous register of “foreign agents.” According to the law adopted in 2012, a non-profit organization is obliged to register as well as bear the label of a “foreign agent” if it receives any financial support from abroad, and if the Ministry of Justice recognizes its activity as political (in practice, if it carried out any public activity). The law was later tightened on the initiative of Konovalov. So, in September 2015 Konovalov introduced an obligation to warn about the foreign origin of funds of Russian legal entities wishing to transfer funds or other property to non-profit organizations.

At the same time, Konovalov’s department is pleasurable to “loyal” NGOs. In 2017, against the backdrop of corruption allegations against Prime Minister Dmitry Medvedev, the Russian Ministry of Justice removed reports from all non-profit organizations from its portal submitted before 2014. According to a representative of the Russian division of Transparency International, Ilya Shumanov, “Recently, there have been many scandals with foundations, including the foundations related to Medvedev. The abundance of this information could affect the fact that the Justice Ministry decided to delete the reporting of all NGOs before 2014. He set a deadline for himself and deleted everything. This is not legal, because publicly significant information has been deleted.” Such a decision of the Ministry of Justice may be beneficial to the Kremlin since the practice is widespread when influential people use various foundations to hide the ultimate beneficiaries. As followed from the investigation of the Anti-Corruption Fund “He is not Dimon for us,” the Russian Prime Minister owned various assets, managing them through a network of nonprofit funds. Among such assets, they found vineyards in Italian Tuscany and a yacht formerly owned by an offshore company.

Alexander Konovalov is probably not the worst representative of the Russian government. However, his readiness to adapt to the dictatorship does not do him honor. While in the ministerial position, he “only obeys the orders,” which means he shares a feasible responsibility for tightening the political regime. As a member of the Security Council of Russia, he also has the floor in making foreign policy decisions that have led the country to international isolation.