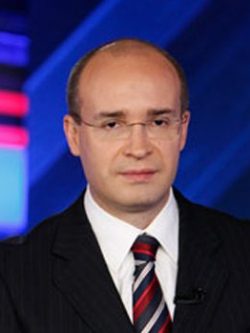 KONDRASHOV, Andrei Olegovich (b. 1973 in Almaty) graduated from the Journalism Department of the International Independent Ecological and Political University in Moscow. The entire professional biography of Kondrashov is associated with the All-Russian State Television and Radio Broadcasting Company. Since August 19, 1991, he has been working in the Vesti program. Since 1992, he has been a permanent employee of VGTRK, first as a correspondent for Central Asia, and since 1999, in the Moscow editorial office. In 2003, he became a political commentator for Vesti. Since 2005, he has been the anchor of Vesti, Vesti +, and Vesti Nedeli programs. Since March 2014, he has also been hosting a Sunday evening newscast.

Since July 2016, he has been the Head of the Directorate of the Vesti Program. Since April 2, 2018, he has been the First Deputy General Director of the All-Russian State Television and Radio Broadcasting Company, which oversees the state holding’s information division. In June 2018, he was the co-host of the TV program “Direct Line with Vladimir Putin.”

Complicity in the legitimation and propaganda of the Putin regime.

The basis of Kondrashov’s accusation is the official position of the head of one of the largest Russian state-owned media structures, which has been actively used for propaganda purposes for many years, as well as personal participation in the production of propaganda.

As a commentator, presenter and head of information division on the main state TV channel, Kondrashov is directly responsible for actively participating in the information and propaganda support of acts of international aggression by the Russian regime and crimes against humanity. These include the war with Georgia, the annexation of Crimea and military operations in the southeast Ukraine, the catastrophe of MH-17, the assassination of Litvinenko, the attempt on the Skripals, as well as the undemocratic domestic policy of the Russian authorities (justification of the anti-social laws, spreading lies and hatred of the opposition, etc.).

Besides playing the role presenter, Andrei Kondrashov is the author of a few frankly propaganda documentaries that are used as an effective tool in the information war and incite hatred of “enemies of Russia.” Among them are the films “Crimea. Way to the Homeland” (about the annexation of Crimea in the spring of 2014) and “Time of Russia” (about the “unity of the Russian people”).

In 2014, the SBU approved the request of the National Council of Ukraine on Television and Radio Broadcasting to ban 49 Russian media personalities from entry to Ukraine, including Kondrashov, in connection with their active participation in the information campaign against Ukraine and support for the annexation of Crimea. In March 2015, Kondrashov was also denied entry to Moldova for five years.

Kondrashov is one of the Russian propagandists closest to Putin, who made a significant contribution to the creation and strengthening of the regime of authoritarian dictatorship. He was a member of the so-called Kremlin journalists’ pool, headed the press service of Putin in the presidential election of 2018, hosted the propaganda program “Direct Line with Vladimir Putin,” is the author and presenter of propaganda documentaries “Putin” and “Valaam.”

Indirect evidence of Kondrashov’s complicity in the crimes of the Putin regime is his receipt of the highest state awards, including medals of the Order for Merit to the Fatherland (II and I degrees), the Order of Friendship (“for high professionalism and objectivity in reporting on events in the Republic of Crimea”), and gratitude from the President of the Russian Federation.