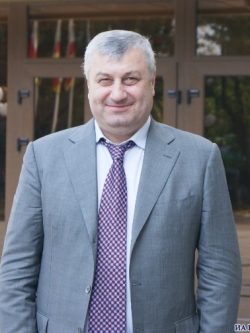 In 1999 - 2001, Kokoity was an assistant to a member of the State Duma of Russia from North Ossetia Anatoly Chekhoev. On December 18, 2001, Eduard Kokoity was elected President of South Ossetia.

He promoted the aggression of Russia against Georgia, the occupation of part of Georgian territory by Russian troops, the killing of civilians and the Georgian military in the five-day war of 2008. At that time, he commanded the separatist armed forces. He led the puppet administration of the Republic of South Ossetia from 2008 to 2011.

He proposed the establishment of a permanent military base of the Russian Federation in South Ossetia (Tskhinvali region). According to the participants of the Free Russia Forum, Eduard Kokoity is an international criminal.

Kremlin slaps down South Ossetia over claim it will join Russia