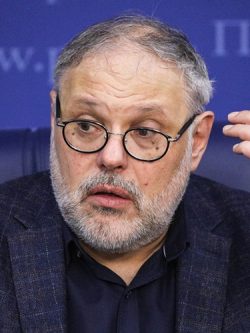 Russian public figure, economist, publicist, blogger, television and radio host. Former official of the presidential administration of Russia. Permanent member of the Izborsk Club. In May 2018, he was elected an academician of the International Academy of Management.

Public support for Russian military aggression against Ukraine. Mikhail Khasin is included in the report "1500 warmongers" compiled by the Free Russia Forum. The report contains the names of Russian public figures, military commanders, members of the parliament, propagandists, artists and athletes who have publicly spoken out in support of Putin's aggression or are directly involved in it. The Free Russia Forum is seeking sanctions against them in the European Union.
Quote: “Forcing the situation around Ukraine is a strategic calculation of the United States, Ukraine is a country with the second hotbed of instability and tension created by Washington after Afghanistan. Putin is simply obliged to save her.”