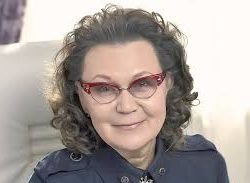 Director of the Institute of Legislation and Comparative Law under the Government of the Russian Federation, co-chair of the working group on the preparation of proposals for amendments to the Constitution.

KHABRIEVA, Taliya Yarullovna (b. 1958 in Kazan) graduated from the Law Faculty of Kazan State University in 1980. From 1985, Khabrieva worked as a lecturer at the university, then as an assistant and assistant professor of state and international law in the faculty of law at Kazan State University. In 1996-2002, she was a leading researcher, head of the sector of the theory of constitutional law, deputy head of the Center for Public Law of the Institute of State and Law of the Russian Academy of Sciences. Since 1997, she was a professor at MGIMO (University) of the Russian Ministry of Foreign Affairs.

On January 15, 2020, by order of Vladimir Putin, Taliya Khabrieva was appointed co-chair of the working group to prepare proposals for amending the Constitution of Russia.

Her husband, Khabriev Ramil Usmanovich, was the general director of the Russian anti-doping agency RUSADA from 2010 to 2015.

Complicity in the constitutional coup, corruption.

The lawyer and academician Taliya Khabrieva formed her corruption clan in the Russian elite. Her husband, Ramil Khabriev, the former Minister of Health of Tatarstan and the head of Roszdravnadzor, was the general director of the Russian anti-doping agency RUSADA at a time when this organization was at the center of the doping scandal. In 2010, Taliya herself was the scientific supervisor of Sergei Naryshkin, at that time - the head of the Administration of the President of the Russian Federation, and then the speaker of the State Duma and currently director of the Foreign Intelligence Service. The independent Dissernet community has discovered a lot of plagiarism in his doctoral dissertation. “All of his scientific work is composed of several other original works,” said Dissernet coordinator Andrei Zayakin. The charge, however, had consequences for neither Naryshkin nor Khabrieva.

Even before her appointment as co-chair of the working group to prepare proposals for amendments to the Constitution of Russia, Taliya Khabrieva cared about the “special way of Russia.” On May 14, 2019, during the St. Petersburg International Legal Forum in the Constitutional Court, she proposed the development of a “sole ideology” in Russia based on “genetically inherent values ​​of the Russian people” even though Article 13 of the Constitution of the Russian Federation protects ideological diversity and imposes a ban on the establishment of any ideology “as a state one or mandatory.”

However, if the Constitution does not correspond to the views of the Putin regime, the Constitution is to be changed. On January 15, 2020, Taliya Khabrieva was appointed co-chair of the working group on the preparation of proposals for amendments to the Constitution of Russia by Putin. On March 14, 2020, Putin signed constitutional amendments prepared by the Khabrieva group. These amendments, and in particular the amendment on the “nullification of the presidential term,” are aimed at the direct, lifelong usurpation of power by Vladimir Putin. Besides, they allow the Russian authorities to ignore the decisions of the European Court of Human Rights, introduce the concept of “internal threats” that the Security Council of the Russian Federation must fight, and also expand the powers of the president. They completed the constitutional and legal drafting of Putin’s dictatorship and are regarded by the Free Russia Forum as an illegitimate and anti-democratic constitutional coup.