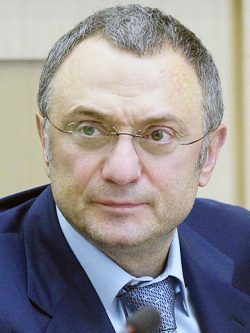 The owner of the financial and industrial group Nafta Moscow, a member of the Council of the Federation from the Republic of Dagestan.

KERIMOV, Suleiman Abdusaidovich (b. 1966 in Derbent) is a Russian billionaire businessman and politician of Lezgin origin. Kerimov graduated from the Dagestan State University in 1989 with a diploma in Accounting and Business Analysis, and started working at the Eltav plant of the Ministry of Electronics, worked there until 1995, rising from a rank-and-file economist to assistant general director on economic issues. According to media reports, Karimov earned the initial capital in the early 1990s. In 1993, the management of the Eltav plant established the Federal Industrial Bank (Fedprombank) and registered it in Moscow for the convenience of mutual settlements with its customers. Suleiman represented the interests of Eltav in the new Fedprombank. Fedprombank financed large industrial companies that were in crisis. So, Karimov and his partners became creditors of large energy supply companies. After the Russian economy stabilized, the debts were repaid with significant profits for the bank and, therefore, for Karimov. Then, Karimov became the controlling owner of Fedprombank.

In 1995, Kerimov was appointed the deputy general director of the Soyuz-Finance trading and financial company (worked in the aviation business, raw materials industries, and the banking sector). In April 1997, Karimov became a research fellow at the Moscow International Institute of Corporations, and in February 1999 was appointed the vice president of it. In October 1998, he acquired 55 percent of the shares of the investment company Nafta-Moscow (traded in oil and oil products) from its management. Over the year, he increased his share in the company to 100 percent. Since that period, Karimov has managed this investment holding, which has become his main business tool and began to actively engage in investment and resale transactions.

Since December 1999, Karimov also belongs to the country's political elite. In December 1999, he was elected to the State Duma of the Federal Assembly of the Russian Federation from the LDPR party. On December 7, 2003, Karimov was re-elected to the State Duma. In 2007, he left the LDPR and joined the United Russia faction, and later became the Senator from Dagestan in the Council of the Federation. In March 2011, Kerimov was elected to the Dagestan National Assembly from the United Russia list and reapproved as the representative of Dagestan in the Council of the Federation of the Russian Federation. In March 2019, the French court charged Karimov with tax evasion in France.

In 2017, the French authorities accused Kerimov of tax evasion and money laundering when buying real estate. French law enforcement authorities suspected Kerimov of hiding tens of millions of euros from the tax authorities when buying an elite property in the south of France through French banks and a chain of companies registered in Monaco and Luxembourg.

Businessman Andrei Andreev repeatedly accused Kerimov, as well as Roman Abramovich and Oleg Deripaska of a raiding seizure of his business. Andreev controlled Avtobank, the Ingosstrakh insurance company, the Ingosstrakh-Russia insurance company, the Orsk-Khalilovsky metal plant, the Ingosstrakh-Soyuz bank, and several other enterprises. In the fall of 2001, all these firms were re-register for the companies controlled by Kerimov, Deripaska, and Abramovich. Andreev accused them of seizing his business, putting pressure and blackmail of the directors of the companies. He did not receive money from the sale of the assets and filed a complaint to law enforcement agencies.

The acquisition in 2005 of the largest Moscow construction holding SPK Razvitie, which unified the corporations Glavmosstroy, Mospromstroy, and Mosmontazhspetsstroy, is also considered a raider seizure made by Kerimov’s structures (the head office of the company was attacked by 200 people armed with baseball bats and metal bars).

Kerimov was one of the Russian oligarchs named in the Countering America's Adversaries Through Sanctions Act, CAATSA, signed into law by President Donald Trump in 2017. In April 2018, the U.S. imposed sanctions on Kerimov and 23 other Russian nationals.