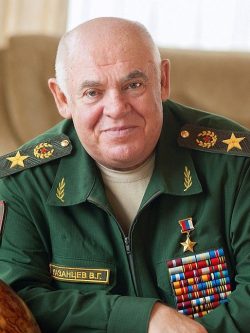 KAZANTSEV, Victor Germanovich (b. 1946) is a chief inspector of the group of inspectors of the Joint Strategic Command of the Southern Military District. From 1956 to 1963, he studied at the Sverdlovsk Suvorov Military School. In 1966, he graduated from the Leningrad Higher Combined Arms Command School, in 1979, the Frunze Military Academy, and in 1987, the General Staff Military Academy.

Victor Kazantsev was dismissed to the reserve in May 2000 with the rank of an army general. From May 18, 2000, to March 2004, he was a Plenipotentiary Representative of the President of the Russian Federation in the Southern Federal District. Since 2015, he has been the chief inspector of a group of inspectors of the Joint Strategic Command of the Southern Military District.

Criminal negligence, raiding, involvement in armed intervention in the internal affairs of Ukraine.

General Kazantsev belongs to that inglorious row of Soviet and Russian military leaders who regarded the soldiers as cannon fodder. The case of the so-called “friendly fire” against the Armavir Special Forces detachment in September 1999 became the most vocal. Then, a special forces detachment sent by Kazantsev to take on a height of 715.3 “Television Tower” in the Novolaksky district of the Republic of Dagestan was subjected to several airstrikes and was almost destroyed leaving 33 people killed, and 76 seriously injured. According to General Troshev, “When militants from Chechnya broke into the Novolaksky direction, at one point Kazantsev became impatient. It was on the day when the “feds” attacked the height. The commander hurried, drove the units forward without waiting for aviation support. As a result, the interaction between the federal forces was broken. The airstrike was a little late.”

The military prosecutor’s office of the North Caucasus Military District opened a criminal case against Colonel-General Kazantsev, as well as Lieutenant General Gorbenko, Major Generals Terentyev and Timchenko, but the cases were soon dismissed. The criminal prosecution of other participants in the incident was discontinued in connection with the amnesty on the occasion of the anniversary of the victory in World War II in Europe. As a result, none of those who decided on the assault and airstrike took responsibility for the death of the detachment. Moreover, the injured soldiers and officers were not able to recover compensation in court.

As Plenipotentiary Representative in the Southern Federal District, General Kazantsev also took strategic “heights.” Under his leadership, there was a kind of “seizure group” which took away businesses from their rightful owners. It is noteworthy that the federal inspector Korovayko led that this raider work, the one who was responsible for the development of small and medium-sized businesses in the Kazantsev’s office. So, during one of the raids, the director and owner of the Samtrest winery Bondo Babunidze and his partner Revazi Khabuliani were brutally beaten. The wife of the Plenipotentiary Representative Tamara Kazantseva promised them her patronage and assistance in “developing the business” in exchange for a part of the company's shares. Instead of help, a group of Korovayko's assistants appeared at the winery, who forced the director to sign a debt receipt, so that allegedly he borrowed a large sum from them. Using these debt receipts, the raiders took away the winery. Appeal to the court did not help the businessmen. Similarly, the Kazantsev family tried to seize the Kuleshov packaging factory, the largest enterprise in the south of Russia producing containers and packaging for the food industry.

Being the chief inspector of the group of inspectors of the Joint Strategic Command of the Southern Military District since 2015, Kazantsev was aware of the maneuvers of the Russian army units near the border of the Donetsk and Luhansk regions of Ukraine, as well as weapons traffic.

A free Russia will need a modern and effective army that will serve the people and value human life, and will not rely on thoughtless command, taught by outdated methods of the early 20th century. Kazantsev borrowed from the military to the civilian service the manners of a tyrant general and used them with impunity, being part of Putin’s system of the “power vertical.” Dismantling of this system will also mean dismantling the treatment of an individual as raw material.