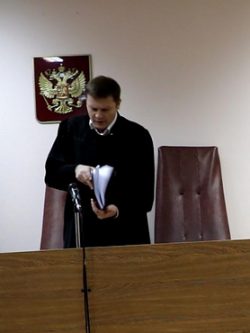 Judge Kaveshnikov extended the detention of the defendants of the Bolotnaya Square case in 2012-2014. He sentenced Ivan Nepomnyashchi, a defendant in Bolotnaya Square case, to 2.5 years in prison for participation in the opposition rally on May 6, 2012. He imposed and extended house arrest to activist Ildar Dadin, who was later sentenced to three years in prison for attending peaceful protests. Judge Kaveshnikov repeatedly sentenced opposition members to administrative arrests.