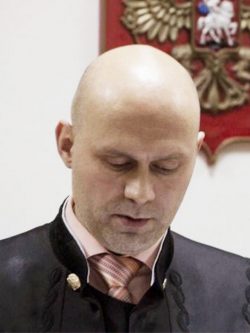 Judge of the Basmanny District Court of Moscow (2007 - to date). He came to the judicial system from the military prosecutor's office.

Judge Karpov participated in the Yukos case, he authorized the arrest in absentia of Andrei Leonovich in December 2009, the former head of the Yukos-Moscow Treasury, on trumped-up charges.

In 2011-2013, he participated in the Magnitsky case. He refused to file complaints regarding the investigation into the circumstances of the murder of Sergei Magnitsky in the Matrosskaya Tishina jail.

In 2012-2016, he made politically motivated decisions on the arrests of participants in the Bolotnaya Square case.

In 2014 changed Alexey Navalny’s recognizance not to leave for house arrest in the Yves Rocher case. The ECHR ruled that during the trial the Russian court violated Articles 6 and 7 of the Convention on Human Rights, namely, the right to a fair trial, and the sentence was arbitrary and unreasonable.

On February 10, 2015, extended the detention of a captured Ukrainian pilot Nadezhda Savchenko, who was kidnapped from the territory of Ukraine by the pro-Kremlin militants and FSB officers and illegally transferred to Russia.