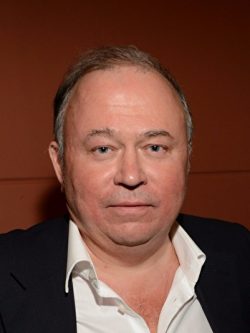 KARAULOV, Andrey Viktorovich (b. 1958) is a Russian propagandist, host of TV programs and author of films, president of the production company Moment of Truth. Born in Moscow Region, he graduated from the Russian Academy of Theater Arts (GITIS) in 1981. In 1982-1983, he served in the army. Between 1983 and 1992, he was an author and literary editor at Theater Life, Ogonyok, Our Heritage, Soviet Russia, Rodina, and Nezavisimaya Gazeta. In 1992–2016, he was a presenter at the Moment of Truth TV program, aired on RTR (before 1997), TNT (until 1999), TV Center (2000-2010), and Fifth Channel (2011-2016). In 1998–2006, he was also an author of the Russian Century program on NTV and TVC channels. Simultaneously with the Moment of Truth, he hosted the Stolen Air and Russian People programs on TNT and the National Treasure at the TVC. As a visiting expert, he participated in the Special Correspondent programs with Arkady Mamontov on the Russia-1 TV channel.

Active participation in the aggressive propaganda of the Putin regime, in the creation and dissemination of information in the interests of the political leadership of the Russian Federation. He intentionally distorted reality, deceived people and instilled aggression, an atmosphere of fear, xenophobia, and chauvinism in society. He specialized in fomenting anti-Western and anti-Ukrainian sentiments in society, hatred of the leaders of the anti-Putin opposition and the exaltation of Vladimir Putin.

The basis of the accusation is the official position of the head of the production center, which has been actively used for propaganda purposes for many years. Karaulov has become one of the most striking examples of the devaluation of information and investigative journalism, the rejection of professional ethical standards for the sake of selfish service to the Putin regime.

Karaulov was repeatedly accused of the creation of made-to-order “investigations” and “documentaries”. In 2009, the Pravda newspaper commented on the information about using his program to throw compromising material and discredit political opponents of the government: “Plots are made with obvious fraud, rude juggling of facts and loud driving of obsessive, crazy ideas into the minds of people... The program became a tool of persecution of dissenters in the hands of the authorities. The Moment of Truth is a kind of skewer of lies, with any extravagant ideas of the author and his biased guests strung on it.”

In 2014, Karaulov released the film “Fascism As It Is,” in which he accused the new Ukrainian authorities of crimes and killings of opponents and civilians. The same year, in the film “How did the Boeing fall?” he accused the Ukrainian Air Force of the crash of the MH17 flight of Malaysian Airlines in Eastern Ukraine over the territory controlled by pro-Kremlin terrorists. In 2015, he published the book “Genocide of Russians in Ukraine. What the West is silent about,” in which “the author tells who and why is carrying out this genocide, how the West supports the anti-Russian forces in practice,” and also that “Russophobia of the West will only increase, and Ukraine has become a testing ground for all kinds of ways to disperse and destroy the Russian people.”

In April 2015, Karaulov, with the head of the All-Russian State Television and Radio Broadcasting Company (VGTRK) Oleg Dobrodeev, NTV CEO Vladimir Kulistikov, the head of the Russia Today news agency Dmitry Kiselev, and propagandists Konstantin Syomin, Vladimir Solovyov, and Arkady Mamontov, as well as a Duma member and TV presenter Alexander Pushkov got included on the Nemtsov List named after the assassinated leader of the Russian opposition. These were the people, according to the leader of the opposition party RPR-PARNAS and a former Prime Minister Mikhail Kasyanov, “who seriously violated human rights and incited hatred against Boris Nemtsov, actually bullied him on TV, inspired violence against him,” and should be included in the sanctions lists.

In 2017, a few days after the release of the film-investigation of by Alexei Navalny “He Is Not Dimon for You” about the corruption of Prime Minister Dmitry Medvedev, Karaulov released a counter-investigation “Through the Eyes of the Clown: How Navalny Makes All of Us Fools”. This propaganda film turned out to be so notorious that it was not even approved by Karaulov’s bosses in the Presidential Administration and the FSB. He complained to Vladimir Putin “as a friend” about it: “The helplessness of our entire ideology before Navalny overwhelmed me. This insignificant figure turns into a symbol before our eyes... it is not clear why. How was it allowed? Where were all our services (primarily ideological)? Why, after Navalny’s film about Medvedev I fought with Navalny alone? Why, when my film Through the Clown’s Eyes about Navalny received — as soon as we posted it on the Internet — 9 (!) hacker attacks, and the FSB, when I turned to them through our former caretaker Komelkov, failed to protect our film?”

In 2018, Karaulov made, according to his assessment, the “main film of his life” about Putin, which all TV channels refused to air. In it, he talked about “how Putin raised Russia, how he revived industry” and that “Putin could die on the very first night of his presidency.” According to media analyst Irina Petrovskaya, that film showed “Putin as a superstar”: “Strong thing! Almost all terrorists in the world are interested in eliminating Putin and the collapse of Russia. And be sure that they would have destroyed it, but the Messiah came and saved Russia risking himself every second... Even for the bosses accustomed to flattery, Karaulov’s praises are too much, which once again proves how important it is for propagandists to follow the trends and not to spoil porridge with too much butter.”

Corruption contest A Russian TV anchor aired corruption accusations against regional government officials. They accused him of using the segment itself to demand bribes.