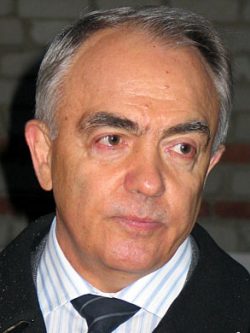 KALININ, Yuri Ivanovich (b. 1946) is a Russian jailer. Since 1970, he served in the penitentiary system: starting as an inspector of the operational part of the penal colony, by 1988 he was promoted to head of the Directorate of Correctional and Labor Institutions of the Saratov Region. In 1992-1997, he was the head of the Main Department for the Penitentiary Service of the Russian Ministry of Internal Affairs. In 1997, he became Deputy Head of the Department of the Ministry of Justice of the Russian Federation. The next year, he became the Deputy Minister of Justice. From 2004 to 2009, he was the Director of the Federal Penitentiary Service. Between 2009 and 2012, he was again Deputy Minister of Justice and a member of the Council of the Federation. Since 2012, he has been in the management of Rosneft as a Vice President, Member of the Management Board, and since 2014, Deputy Chairman of the Management Board. In December 2019, he retired as Vice President for Human Resources.

Direct complicity in the implementation of the criminal policy of the Russian leadership as well as the participation in large-scale corruption schemes.

Kalinin is a person inextricably associated with the inhuman system of penal punishment, inheriting the worst norms, traditions, and practices of the Gulag. He had been working in this system for almost forty years, beginning to serve in the early Brezhnev years and resigned under Putin. As the jail supervisor, he bears full personal responsibility both for the generally inhuman, torture nature of the Russian penitentiary system and for the numerous crimes of its employees against the dignity, health, and life of Russian citizens, who in various ways became its victims.

A case in point is the murder of Sergei Magnitsky in the Matroskaya Tishina pretrial detention center. The Magnitsky Act’s list does not include Kalinin. There are mostly the heads of the detention centers where the lawyer was kept and died. Formally, Kalinin resigned from the post of head of the Federal Penitentiary Service (FSIN) three months before this tragedy, but it became the result of, among other things, the inhumane system of the execution of sentences, which he led for decades.

Kalinin’s name has been mentioned more than once in investigations of large-scale corruption schemes related to fraudulent deliveries of goods and services in the FSIN system, as well as with numerous facts of creating lavish conditions of detention for the mafia bosses.

Getting the senator’s chair immediately after resignation is one of the forms of reward for devotional service to the authoritarian regime for Putin officials. The same applies to the appointment to the leadership of one of the largest state corporations controlled by one of the most influential Putin’s oligarchs, Igor Sechin. It is significant that when the top management of Rosneft actively bought up large blocks of the company’s shares, Gazprombank, controlled by another close friend and longtime neighbor of Vladimir Putin, Yuri Kovalchuk, acted as the main creditor. According to official information on the Rosneft website, by November 2019, Yuri Kalinin was the owner of a package of 203,916 shares of Rosneft.

Observers also noted that the appointment of Kalinin to Rosneft as Vice President for Human Resources showed the similarity of the methods used by him at his former and new jobs, based on corruption and clannishness. As an observer Alexander Trushkov noted, “it’s unlikely that Yuri Ivanovich Kalinin, who worked all his life in the penal system, thought that at the peak of his career he would be Vice President for Human Resources at one of the world's largest oil companies, Rosneft. I would very much like to believe that the former master of all Russian prisons is doing team-building and headhunting, trains employees in corporate ethics and conducts interviews with foreign top managers. Unfortunately, in reality, the opposite happened: work with personnel at Rosneft began to be based on prison principles.”

Indirect evidence of Kalinin’s complicity in the criminal regime’s activity is the receipt of the highest state awards, including the Orders of Courage and For Services to the Fatherland of the 2nd — 4th degrees.