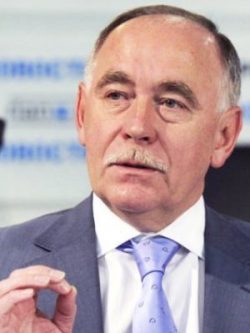 IVANOV, Viktor Petrovich (b. 1950 in Novgorod) graduated from the Leningrad Electrotechnical Institute of Communications with a degree in radio communications in 1974. He was an activist of the Komsomol committee of the institute, where he met Boris Gryzlov. After graduation, Ivanov served in the Soviet Army, then worked as an engineer in the Vector scientific and production association in Leningrad. In 1978, he graduated from the Higher Courses of the KGB and until 1994 worked in the Office of the KGB for Leningrad and the Leningrad Region. In 1987-1988, he served in Afghanistan.

With the decline of communism, Ivanov, with support from the KGB, became interested in business. In 1990, together with a lawyer Yuri Novolodsky, he founded the Bazis Business Cooperation Fund, where he became Director-General. In December 1990, with Boris Gryzlov and Valentin Chuikin, he founded the enterprise Blok and became its director. According to the Charter, the company processed raw materials and organized tourism, but in fact, it provided services to the Tambov gang, the strongest in St. Petersburg. In October 1994, Ivanov became head of the administrative department of St. Petersburg City Hall on the recommendation of Vladimir Putin. At the city government, Ivanov oversaw the work of law enforcement agencies, and resigned in 1996, when the mayor Sobchak lost the election. In 1996-1998, Ivanov served as CEO of the Russian-American company Teleplus, which organized broadcasting of foreign satellite channels.

When Putin became director of the FSB in 1998, he appointed Ivanov to the post of head of the FSB’s Internal Security Department. From April 1999 to January 2000, Ivanov was deputy director of the FSB, head of the Department of Economic Security. In 2000, Putin, who became president of Russia, made Ivanov Deputy Head of the Presidential Administration. In June 2002, Ivanov became Chairman of the Board of Almaz-Antey Air Defense Concern, which produces anti-aircraft missile systems. From March 2004 to May 2008, Ivanov was an assistant to the president of the Russian Federation. In June 2005, Ivanov was elected Chairman of the Board of Aeroflot. On May 15, 2008, by decree of President Medvedev, Ivanov was appointed director of the Federal Drug Control Service of the Russian Federation (FSKN). In 2016, after the abolition of the Federal Drug Control Service, Viktor Ivanov joined the State Anti-Drug Committee. Ivanov was blacklisted by the United States in the aftermath of the 2014 Crimean Crisis. On May 7, 2016, he left the Security Council of the Russian Federation.

Viktor Ivanov is one of Putin’s most vengeful associates. An old companion to the president from the times of gangster Petersburg, he attracted too much attention to his past, so he could not advance further in the power hierarchy than the head of the State Drug Control Committee. His name is associated with the smuggling of Colombian cocaine by the Tambov gang, the tightening up the regional political landscape in Russia, the government attack on Yukos, the murder of Litvinenko, and the extrajudicial blocking of websites.

Most of the time in the KGB, Viktor Ivanov worked at the HR department. The KGB sent there only those officers who were unsuitable for fieldwork as operatives or analysts. Other KGB officers treated the HR officers with contempt, while the HR officers responded by collecting compromising materials on them. Ivanov's former colleagues described him as a quiet man who never expressed initiative. When in the late 1980s, the KGB, with the help of criminal circles, joined the business, Ivanov was able to reveal his talents. He established business relations with the Tambov criminal group and its leader Vladimir Kumarin. He helped Kumarin in the fight against the Malyshev gang for the St. Petersburg Sea Port, which was a logistical base for the transportation of Colombian drugs, among other things. Ivanov acquired a share in the capital of the port as a result of business cooperation. Ironically, just at that time, he was appointed the head of the Anti-Smuggling Department.

Through cooperation with the mafia, Ivanov met with Vladimir Putin, who was an important link in drug smuggling through the St. Petersburg seaport. Ivanov, as the head of the Anti-Smuggling Department of the FSB, collaborated with the Tambov gang, helping them gain control over the St. Petersburg seaport, which they used to transport drugs to Europe. Putin, while being Vice Mayor, advised the company SPAG, established on the initiative of the city administration and, according to some reports, laundered Colombian Cali drug cartel money in St. Petersburg. The leader of the Tambov gang, Kumarin, was on the Board of Directors of a subsidiary of SPAG.

Ivanov followed Putin to Moscow. Here he participated in the purge of the FSB and in establishing the vertical of “sovereign democracy,” in other words, the authoritarian regime. When Ivanov worked in the Presidential Administration in 2000-2004, he became one of the authors of the so-called “Bashkir electoral technology”. It means that if a potential election winner does not suit the Kremlin, this person is denied registration or removed from the election during the campaign. In subsequent years, this became a commonplace political practice in Russia.

Ivanov was one of the initiators of the Yukos case, and in the summer of 2003, he oversaw the expulsion from the Russian State Humanitarian University of its rector, one of the largest shareholders of the MENATEP group, co-owner and Vice President of Yukos, Leonid Nevzlin. According to the report of Alexander Litvinenko and Yuri Shvets, he made every effort to open a criminal case against Khodorkovsky, to convict him, and make his stay in the penal colony as harsh as possible.

It was this report by Litvinenko and Shvets, which collected information about the ties between Ivanov and Putin with drug smuggling and money laundering, that became the trigger for the decision to kill Litvinenko. The report was commissioned by a Western company planning to sign a contract with the Russian government. The person directly interested in signing the contract was Viktor Ivanov. Litvinenko handed a copy of the report to Andrei Lugovoi, but at the Moscow airport Lugovoi was detained and the authorities got the file, after which, allegedly, the Kremlin decided to murder Litvinenko.

For several years, Viktor Ivanov headed one of the main repressive bodies of the Russian regime, the Federal Drug Control Service, which, ironically, fought drug trafficking. This agency was one of the lobbyists for the adoption of the law on pre-trial blocking of websites and establishing the infamous registry of banned sites in 2012. Sites allegedly containing “drug propaganda” could be included in this list at the request of the State Drug Control Agency. In the very first month after the adoption of the law, the Internet encyclopedia Lurkomorye and the Librusec web library got blacklisted at the request of the Federal Drug Control Service. Soon, this law became one of the tools of censorship against the political opposition.

It is hard to imagine a more hypocritical regime than Putin’s. The Chekist, who had built his career on smuggling Colombian cocaine, headed the agency, which blocked the websites that mention drugs and traveled around the United States with a campaign against the legalization of marijuana. The KGB taught Ivanov to destroy the lives of people and to be disingenuous. When Russia frees itself from Putin’s yoke, it will be vital to get rid of the poisonous legacy of the Cheka / NKVD / KGB / FSB and to call their collaborators to account.