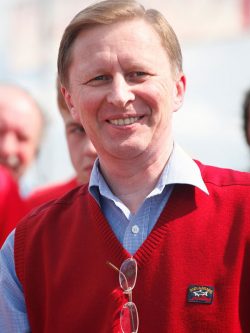 Member of the Security Council of Russia

IVANOV, Sergey Borisovich (b. 1953 in Leningrad) is a former Minister of Defense of Russia and one of the closest associates of Vladimir Putin. After graduating from the philological faculty of Leningrad State University in 1975, he was hired by the KGB. In 1976, he graduated from the higher courses of the KGB of the USSR in Minsk, and in 1981, from the Institute of the KGB of the USSR in Moscow. In 1976-1977, he was an employee of the 1st Division of the KGB Directorate for Leningrad and the Leningrad Region, where he met with future President of the Russian Federation, Vladimir Putin. He was a KGB resident in Finland, and after the disclosure by Oleg Gordievsky, he was transferred to Kenya. Between 1991-1998, he worked for the Foreign Intelligence Service of Russia, becoming First Deputy Director of the European Department of the Russian Foreign Intelligence Service.

The main basis for Ivanov’s accusation is his many years in the highest positions of the executive branch, his direct active participation in the creation and functioning of an illegitimate, anti-democratic, corrupt state system. Ivanov is a person who has been in the inner circle of Vladimir Putin for more than twenty years, and from the first years of the formation of the authoritarian regime held the highest posts in the official and unofficial hierarchy of power in Russia. Putin himself admitted that Ivanov was one of his closest associates. According to former US Secretary of State Condoleezza Rice, “regardless of his position or rank, Ivanov remained a reliable channel of communication with Putin even in the most delicate situations.”

In 1999-2001, Sergei Ivanov participated in the operation to establish control over the largest TV channels by the seizure of assets from Vladimir Gusinsky and Boris Berezovsky.

In 2006, Ivanov’s statement about Russia's readiness to destroy potential terrorist attackers anywhere in the world caused a great resonance: “If we know for sure that a terrorist act is being prepared in a particular region of the world against Russia or its citizens, we reserve the right to inflict strike to prevent it... For this, we can use anything but nuclear weapons, if only it would be effective.” This statement was interpreted by many as a confirmation of the readiness of the Russian authorities to destroy not just real terrorists but mainly political opponents abroad.

Many media reported on the possible involvement of Ivanov in the high-profile political murders carried out during his tenure as Minister of Defense. At the same time, some experts, as Yevgeny Limarev. directly called him the paymaster of the assassination of Alexander Litvinenko in the same 2006, while others noted that “there are political decisions, but not of the level of Ivanov, but much higher... Ivanov could only come up with a proposal, but could not give the final go-ahead” (Mikhail Delyagin).

Two years earlier, Ivanov had been called the main organizer of the murder of the former acting President of the Republic of Ichkeria Zelimkhan Yandarbiev, carried out by the GRU on February 13, 2004, in Doha, Qatar.

As a person responsible for the military-industrial complex, Ivanov contributed to the militarization of the Russian economy, to the large-scale corruption in this area, and illegal arms sale to conflict zones.

Observers associated Ivanov’s appointment as head of the Presidential Administration in 2011 with the need to tighten the regime during a period of growing social tension and the rise of civic activity in Russia. During this period, the Kremlin also prepared and implemented a large-scale plan of aggression against Ukraine, in which the Presidential Administration played the role of one of the main organizers and coordinators. It is no coincidence that he was on one of the first sanctions lists of the United States for the annexation of Crimea in March 2014.

Both of Ivanov’s sons made a career in the largest Russian banks, including Vnesheconombank, VTB, Gazprombank, Russian Agricultural Bank, and Sberbank. The youngest son, Sergey, has been the president of the ALROSA diamond company since 2017.

Indirect evidence of Ivanov’s complicity in the activities of the criminal regime is his receipt of the highest state awards, including the orders For Merit to the Fatherland of all four degrees, the orders of Honor, Red Star, Alexander Nevsky, For Military Merit, etc. He got some of the awards by secret presidential decrees.