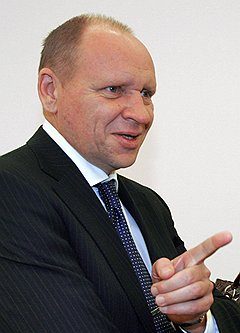 First Deputy Chief of Staff of the Presidential Administration of Russia

GROMOV, Alexey Alexeyevich (b. 1960) is a Russian politician and Soviet-Russian diplomat. Born in Zagorsk near Moscow, he graduated from the History Department of Moscow State University in 1982. Reportedly, he cooperated with the KGB from his student years. In 1982, he began working for the Ministry of Foreign Affairs, as a Soviet diplomat in Czechoslovakia. Being an Attache of the Soviet Embassy in Prague in the late 1980s, he got acquainted with Vladimir Putin. After the collapse of the USSR, he continued working for the Russian diplomatic mission in Slovakia.

Alexei Gromov oversees the production of state propaganda in Russia, directs the work of Russian state and quasi-private television, as well as other media. According to the independent investigative journalists’ portal The Project, Gromov defines the direction and limits of the government censorship and propaganda, makes instructions and directives for leading media outlets, oversees management and financial support for the presidential pool of journalists. He has been working in the Presidential Administration longer than any of his colleagues, and, reportedly, he enjoys the unlimited confidence of Putin.

Previously, he took part in a seizure of an independent TV channel NTV in 1999-2003 that marked Kremlin’s takeover of the federal TV channels. As he controls the media market of Russia, his family and friends succeeded in building up a corrupt business in this field. Gromov owns a house in a prestigious residential area in the western suburbs of Moscow and an apartment in the downtown, the cost of which many times exceeds his official income. His son, Alexey Gromov Jr., is associated with oligarchs Oleg Deripaska and Roman Abramovich. He participates in a joint project with Deripaska for the production of aluminum rims.

March 20, 2014, the Office of Foreign Assets Control (OFAC) published that Gromov and 19 other men have been added to the Specially Designated Nationals List (SDN). On 12 May 2014, Gromov was added to the EU sanctions list due to his role in the 2014 Crimean crisis. He is barred from entering the EU member states, and his assets in the EU have to be frozen.

Master of Puppets. The Man Behind the Kremlin’s Control of the Russian Media

In Putin’s Russia, the hollowed-out media mirrors the state