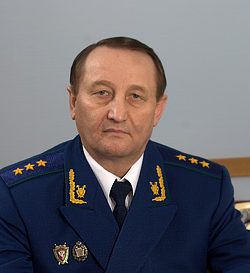 Viktor Grin took part in the politically motivated persecution of the Yukos employees. To ensure the continuation of repression by the prosecutor-investigative group, he illegally determined the city of Moscow as the venue for the investigation in the “second Yukos case.” He sent the case to court, ignoring the gross violations of the rights of the accused and their defenders. He sanctioned and insisted on the detention of the terminally ill Yukos lawyer Vasily Aleksanyan. He sent his case to court, realizing Aleksanyan’s conditions and that he could die while in custody. Aleksanyan suffered from AIDS, tuberculosis, and cancer. He spent 36 months in custody and was released on bail in January 2009. In October 2011, Aleksanyan died.

Grin also approved the indictment in the second criminal case against Mikhail Khodorkovsky and Platon Lebedev. Victor Grin was one of the people who signed the indictment in the criminal case of Sergei Magnitsky in 2009 who died while in custody. In that connection, the U.S. included him in the list of international human rights violators under the Magnitsky Act. Viktor Grin also took part in the persecution of an illegally captured Ukrainian pilot Nadezhda Savchenko and thus was included in the Ukrainian sanctions list by the President of Ukraine.