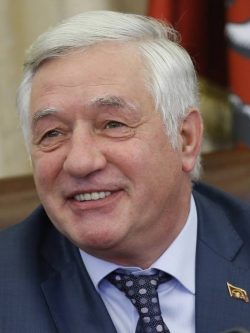 GORBUNOV, Valentin Pavlovich (b. 1953 in Moscow) graduated from the Mechanical Faculty of the Moscow Institute of Transport Engineers in 1975. Since 1977, Gorbunov participated in the organization of elections and was a member of election commissions at various levels. In the 1980s, he was an employee of the apparatus of the Central Executive Committee of the USSR. He also took part in the organization of elections to the First Congress of the USSR People's Deputies. Since 1993, Gorbunov has been working at the Moscow City Election Commission, became its Chairman in 1995, and was re-elected as chairman of the Commission in 1999, 2003, 2007, 2011 and 2016. In 2000, he defended his doctoral thesis on “Constitutional and legal aspects of improving the electoral system in the Russian Federation at the current stage” at the Russian Presidential Academy of Public Administration.

Valentin Gorbunov got used to the technique of rigging elections in the Soviet years when he oversaw that the voters voted unanimously for the “indestructible bloc of communists and non-partisans.” Participation in the exercise of such functions did not meet with serious objections after the collapse of communism, and he continued to organize and conduct elections in New Russia. The new Russian authorities considered his Soviet experience valuable, and for almost 25 years he has been managing the Moscow elections, giving no reason to doubt his loyalty before the Kremlin.

Since Moscow is traditionally the center of the protest activity in Russia, the federal authorities try to avoid uncertainty in the election results in the capital. It is also a very sensitive task for the Kremlin to prevent a serious gap between the results of federal elections in Moscow and in other regions where it is much easier to rig election results and the protest electorate and independent observers are less active. The Moscow City Election Commission, the city and municipal authorities use a rich arsenal of falsifications ranging from a simple prohibition of candidates from running, ending with a swindle with electronic voting and voter lists, rewriting protocols, manipulating vulnerable social groups, multiple voting, etc. The illegal actions of the election commissions in Russia and Moscow, in particular, provoked a wave of mass protests against election fraud in 2011-2012.

City elections are also important. Thus, the Moscow City Duma is already the most disenfranchised regional parliament in Russia and is elected by the majority system to make it easier for local officials to control the constituencies. However, even here the Kremlin and city authorities use illegitimate methods. The elections to the City Duma in 2019 became especially scandalous. Gorbunov, as the head of the Moscow City Election Commission, was accused by independent candidates of not allowing them to run in the elections. A large number of voters’ signatures required for registration of candidates were declared invalid. It is noteworthy that Gorbunov’s agency recognized as invalid even the signatures of famous people, for example, one of the authors of the Russian Constitution, Viktor Sheinis, and the famous lawyer Elena Lukyanova. The deliberate exclusion of independent candidates has become a catalyst for mass protests in the summer of 2019.

Such a profanation of the election process turns to be quite beneficial. In 2014, the Anti-Corruption Foundation (FBK) discovered the expensive property of the Gorbunov family on the Adriatic coast of Croatia. During the infamous elections to the Moscow City Duma in 2019, FBK found out that the value of his real estate in Croatia is about $420,000. Note that the civil servant Gorbunov and his immediate family, according to Russian laws, are not supposed to have foreign financial assets, securities, shares in firms, etc. However, he did not indicate two apartments on the Adriatic in the income declaration, which are registered on the company of his wife and son. Moreover, Gorbunov owns a three-story house of 900 square meters in the Moscow suburbs.

Nothing is surprising in the lack of fair and free elections in Russia when its election system has been led by corrupt officials like Gorbunov for several decades in a row. Seemingly, it is too late to make any cosmetic “improvements” to the electoral system if there was even no critical rethinking and condemnation of the experience of the Soviet totalitarian system. Deception, doublethink, mass fraud, the Stalinist thesis that “it’s not that important how to vote but how to count these votes” are the norm for people trained by the Soviet leadership system. Having failed to cure this disease on time by abandoning lustration, Russia received its metastases in full in the post-Cold War era. It is extremely important to avoid the same mistake next time when the Russians would have to face a similar historical choice.