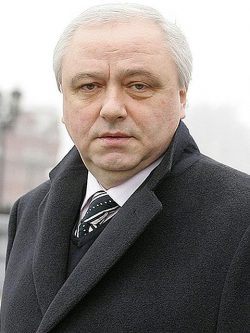 GIORGADZE (GEORGADZE), Igor Panteleymonovich (b. 1950) is a former Georgian politician and a longtime Kremlin’s proxy. Born in Kazakhstan in a family of a future leader of the United Communist Party of Georgia, he graduated from the Higher School of the KGB of the USSR in Moscow in 1973. Up until the collapse of the USSR, he worked in the KGB in Georgia, took part in the Soviet invasion of Afghanistan. During the Georgian Civil War, Giorgadze supported former USSR Foreign Minister Eduard Shevardnadze. From October 1993 to September 1995, Igor Giorgadze served as Minister of State Security of Georgia. In early September 1995, after a failed assassination attempt on President Shevardnadze, Giorgadze was dismissed from the office and fled to Russia. Since that time he has never appeared in Georgia.

In July 2001, the All-Georgian Patriotic Alliance Homeland was registered in Tbilisi, and Giorgadze was elected chairman in absentia. Since 2003, Giorgadze is the head of the pro-Russian Justice Party. Giorgadze repeatedly attempted to take part in the presidential election. Giorgadze has the rank of retired lieutenant general, he is an honorary employee of the KGB of the USSR.

Attempts to carry out an armed coup in Georgia with the assistance of Russian security services, participation in the Kremlin disinformation campaigns.

Igor Giorgadze was accused of organizing an assassination attempt on Eduard Shevardnadze. Soon after the failure of the attack and escape from the Russian military airfield, he was put on the international Interpol wanted list. According to media reports, during the investigation of the attempted murder, Giorgadze was in Syria, and since 1998 he has been living in Moscow permanently. In 2004, already under President Mikheil Saakashvili, Giorgadze was charged with high treason.

In September 2006, 30 members of the Justice party were arrested in Georgia on charges of plotting an armed coup against President Mikheil Saakashvili, receiving illegal funding from Russia, and collaboration with Russian intelligence agencies.

Giorgadze regularly appears in pro-Kremlin media commenting on Georgian events, but his influence in Georgia is insignificant after 24 years of exile. Nevertheless, his statements are widely circulated by the Russian media, which uses them in internal and external propaganda as an “alternative Georgian voice.”

So, in September 2018, Igor Giorgadze spread misinformation about conducting “secret experiments on Georgians” at the Georgian-American research laboratory and that some of them could end up fatally. These statements by the former Minister of State Security of Georgia were picked up by the Russian Foreign Ministry, the Russian Ministry of Defense, and all Russian information and propaganda media. Two months later, when a BBC investigation disproved these allegations, Giorgadze disowned his own words.

Russian disinformation and the Georgian ‘lab of death’, BBC