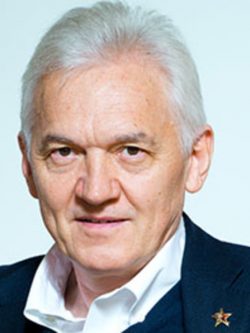 TIMCHENKO, Gennady Nikolayevich (b.1952) is a Russian-Finnish billionaire, a close friend of Vladimir Putin. Born in Soviet Armenia and raised in East Germany and Ukraine, in 1976, he graduated from the Leningrad Mechanical Institute. He started his career as an engineer at the Izhorsky plant near Leningrad, which specialized in building power generators. From 1982 to 1988, he worked as a senior engineer for the Ministry of Foreign Trade. In 1988, Gennady Timchenko became deputy director of the state foreign trade association Kirishineftekhimeksport (KiNEx), which was based on the Kirishi oil refinery, one of the largest refineries in Soviet Russia. Timchenko was responsible for relations with foreign partners.

In 1991, Timchenko moved to Finland and began working for Urals Finland Oy, which became the main buyer of Kirishinefteorgsintez (a parent company for KiNEx) oil products. The same year, KiNEx began cooperation with the Committee on Foreign Economic Relations of Leningrad, which was chaired at that time by Vladimir Putin. In 1995, Urals Finland Oy changed its name to International Petroleum Products Oy (IPP Oy), Timchenko first became the Deputy General Director of the Finnish company, and after a while headed it.

In 1997, together with his Swedish partner Torbjörn Törnqvist, he founded Gunvor. Both Russian state-owned (Rosneft, Gazprom Neft) and private companies (TNK-BP and Surgutneftegaz) sold oil abroad through Gunvor. In 2007, about 30 percent of all Russian oil exports went through Gunvor. Timchenko sold his stake to a partner in 2014 to protect the company from being hit by the sanctions against Russia. In 2007, Gennady Timchenko founded the private investment fund Volga Resources (currently the Volga Group). The company combines Timchenko's Russian assets in the energy, transportation, infrastructure construction, etc. According to Forbes, his total wealth estimates over $20 billion (2019).

In 2003-2004 Russian and foreign media conducted a series of investigations alleging that Timchenko was a close friend and confidant of Putin. According to Time magazine, Gennady Timchenko belongs to a narrow circle of “Putin’s judo friends” along with brothers Arkady and Boris Rotenberg. Timchenko and Putin allegedly had common commercial interests in the 1990s, and Timchenko serves as one of Putin’s wallets by accumulating and keeping large assets in foreign banks, energy and infrastructure companies, and offshore accounts.

In 2008, The Economist published an article on corruption in Russia that mentioned Timchenko and his company Gunvor. The Economist linked Timchenko’s success in Russia with corruption schemes, and Gunvor largely benefited from the arrest of Mikhail Khodorkovsky and the sale of Yukos assets. In 2010, opposition politicians Boris Nemtsov and Vladimir Milov published a report “What 10 Years of Putin Have Brought”, which mentioned Timchenko’s friendship with Vladimir Putin, as well as the use of this friendship in corruption schemes.

In March 2014, following the Crimean status referendum, the U.S. Treasury put Timchenko on the Specially Designated Nationals List (SDN), a list of individuals sanctioned as “members of the Russian leadership’s inner circle”. Timchenko’s Volga Group has been listed by the US Dept of Treasury (OFAC - Office of Foreign Assets Control) as a SDN (specially Designated Nationals) in the Ukraine-related sanction lists of 2014.

From Petrograd to petrodollars – Gunvor’s roots

PUTIN: What 10 Years of Putin Have Brought

Crunch time: As sanctions bite, Putin ally gets into apples