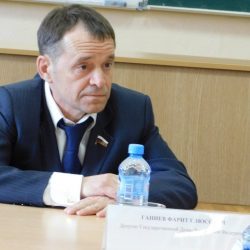 Member of the State Duma of Russia

In 2015, Farit Ganiev was appointed Assistant to the Head of the Republic of Bashkortostan. In the 2016 Duma elections, Farit Ganiev was elected to the State Duma from the ruling United Russia party. He is a member of the Committee on Security and Anti-Corruption.

Investigator Ganiev became widely known in human rights groups due to his participation in the prosecution of the head of Yukos oil company, Mikhail Khodorkovsky and other persons associated with Yukos. His impeccable diligence and loyalty to the ruling regime led him to the post of assistant to the head of Bashkiria and the seat of a member of the State Duma. The determination to comply with the Kremlin’s political precepts made him an accomplice in the death of one of the Yukos defendants.

Farit Ganiev, being a member of the investigation teams, prosecuted Mikhail Khodorkovsky, Boris Berezovsky, Vladimir Gusinsky. From 2008 to 2015, he was the head of the criminal investigation team against the shareholders of the Menatep group of Khodorkovsky and Lebedev. He participated in the investigation of politically motivated cases against Bakhmina, Ivlev, Malakhovsky, Pereverzin, Valdes Garcia and others. Ganiev was the author of the decision to bring Vladislav Kartashov, the former top manager of the Yukos company, as an accused; the authorities of Cyprus refused to extradite. Experts who investigated the case at the request of the Presidential Human Rights Council concluded that all the charges were groundless and politically motivated.

Besides, Ganiev took part in the case of the former vice president of Yukos, Vasily Aleksanyan, a young lawyer and businessman with a Harvard diploma. In September 2006, he was diagnosed with AIDS. During the detention, Aleksanyan’s health deteriorated significantly. He almost went blind and got liver cancer and tuberculosis. In prison, he was tortured and bullied because of his refusal to testify against Khodorkovsky. Law enforcement released him only in December 2008, and in October 2011 he died from the consequences of serious illnesses developed during his 2.5-year term in jail.