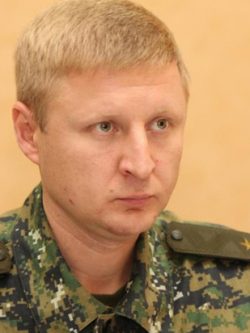 Senior Investigator for Particularly Important Cases under the Chairman of the Investigative Committee of the Russian Federation, Major General of Justice

GABDULLIN, Rustam Rashitovich (b. 1980) is a senior officer of the Investigative Committee of the Russian Federation who headed the investigation of the most high-profile cases against the Russian opposition. He began his career in Chelyabinsk in the prosecutor's office of the Traktorozavodsky district and then moved to the regional prosecutor's office. Since at least 2011 he has been working in the Investigative Committee headquarters in Moscow. Gabdullin investigated several high-profile criminal cases, including the sinking of the ‘Bulgaria’ ship in 2011, a few fraud and corruption cases of politicians and top managers of state corporations, and the fire tragedy in the Kemerovo’s Winter Cherry shopping mall in 2018.

Rustam Gabdullin is one of the most zealous guardsmen of the Putin regime, a direct executor of political repressions. He is best known for his leading role in the criminal prosecution of opposition leaders and activists. He led the notorious investigation of the Bolotnaya Square case in 2012-2016, the investigation against participants in anti-corruption protests in March 2017, the investigation of ‘mass riots’ during the July 27 protests against the prohibition of independent candidates to run for the Moscow City Duma (‘Moscow case’) in 2019, and also a politically motivated money laundering case against the founder of the Anti-Corruption Foundation (FBK) and one of the leaders of the Russian opposition Alexei Navalny and his team. It is noteworthy that Vladimir Putin awarded Gabdullin a medal of the Order ‘For Merit to the Fatherland’ on October 22, 2019, in the midst of the ‘Moscow case’ and Navalny’s prosecution.

As the head of the investigation in the Bolotnaya Square case, Gabdullin signed the main documents on the investigation and operational actions on bringing the opposition activists to criminal responsibility, petitions for their detention and the extension of the arrest. He signed the accusations of Mikhail Kosenko, Vladimir Akimenkov, Yaroslav Belousov, Stepan Zimin, Nikolai Kavkazsky, Leonid Kovyazin, Sergey Krivov, Denis Lutskevich, Alexei Polikhovich, Artem Savelov, Alexei Gaskarov, Ilya Gushchin, Alexander Margolin, Dmitry Buchenkov. In September 2012, he let 38 policemen into the Petrovka detention center who questioned Artem Savelov without a lawyer, threatened him and wanted him to give false testimony. In particular, they wanted him to state that during the ‘riots’ he had followed the instructions of Navalny, Yashin, and other protest leaders. On October 22, 2012, he did not admit lawyers to Leonid Razvozhzhaev, another Bolotnaya case defendant.

After the investigation of the March 2017 protest case, also led by Gabdullin, nine people in three cities were charged under article 318 of the Criminal Code — the use of violence against a government official — and received sentences of up to almost four years in prison. In the ‘Moscow case’ of 2019, 26 people were charged with participation in or organizing ‘mass riots’, as well as other anti-government offenses.

A whole investigation team of 112 officials is investigating the ‘money laundering’ case against Alexei Navalny’s Anti-Corruption Foundation (FBK). Under this case, searches are being conducted all across the country, the Investigative Committee has arrested and blocked the accounts of FBK employees, their relatives, and even friends. Following the instructions of Gabdullin, officers of investigative bodies break into not only the offices and homes of FBK employees but also completely random people: former spouses, neighbors, etc.