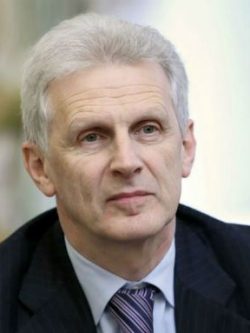 FURSENKO, Andrey Alexandrovich (b. 1949 in Leningrad) graduated from Leningrad State University in 1971. In 1978, he became a Kandidat, and in 1990, a Ph.D. in physics and mathematics. Between 1971 and 1991, for 20 years, he worked at the Physicotechnical Institute in Leningrad as a specialist in computer science.

In 1991 - 1992, he took part in the reconstruction of the notorious Rossiya Bank, created in 1990 by the Leningrad Regional Committee of the Communist Party as a “laundering bank.” The activities of this bank were suspended after the defeat of the Emergency Committee in 1991. In 1992, the main shareholders of the bank were several companies founded by Fursenko, Yakunin, and Kovalchuk, as well as businessman Viktor Myachin. In 1991 - 1993, Andrey Fursenko worked with another person on our list, Yuri Kovalchuk, as vice president of the Center for Advanced Technologies and Developments.

In 1995, he joined the Our Home-Russia party, led by then-Russian Prime Minister Viktor Chernomyrdin. In 1994 - 2001, he was the General Director of the Regional Fund for Scientific and Technical Development of St. Petersburg. After Putin came to power in 2000, Fursenko’s career continued in Moscow. According to Novaya Gazeta, Fursenko was Vladimir Putin’s neighbor in the Lake summerhouse cooperative.

Since January 11, 2010, Andrey Fursenko has been a member of the government commission for economic development and integration. From May 21, 2012, to this day, he is Vladimir Putin’s assistant, the informal head (curator) of the department for scientific and educational policy in the presidential administration.

The Russian academic world and the education sector completely lost its autonomy and economic independence under Andrey Fursenko, turning into an obedient instrument in the hands of Putin's dictatorial regime. Teachers and professors, as well as most scientists, increasingly began to act as ideological servants of the Kremlin, promoting the imperial and loyalist spirit among the Russian younger generation. Let us not forget who was the main driving belt of the liquidation of the institute of free elections in Russia: Fursenko-controlled school teachers, headteachers, and principals make up 90% of precinct election commissions infamous by the large-scale election fraud.

Speaking at a forum of pro-Kremlin youth organizations in Seliger in 2007, Fursenko accidentally let slip, revealing the true goals and objectives of Putin's education policy to the Russian media audience, while at the same time cursing the rest of the Soviet educational system just for the little good that was in it. A quote from the Literary Newspaper: “Speaking at the conference... Minister of Education Andrei Fursenko complained about the inert system in his department that has remained from the Soviet era, which tried hard to nurture a creator. Now, according to the minister, the main thing is to nurture a consumer who can correctly use the achievements and technologies developed by others.”

Fursenko’s position as Putin’s assistant, and most importantly, the informal head of the Office of Science and Education in the Presidential Administration, is not at all an honorable exile. Fursenko simply went into the shadows as a public figure, but nothing more than that. Given the hypertrophied role of the Presidential Administration in the current Russian system of government, there is no doubt that Mr. Fursenko can still bring the country, its education, and science a lot of harm.