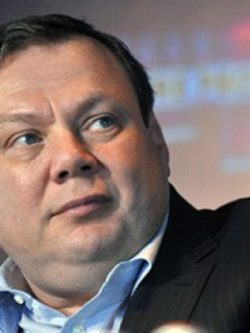 Businessman, Co-owner of Alfa Group and CEO of LetterOne Holdings

FRIDMAN, Mikhail Maratovich (b.1964) is a Russian-Israeli tycoon, founder of Alfa Group Consortium, owner of LetterOne Holdings, a member of the Board of the Russian Union of Industrialists and Entrepreneurs, co-founder of the Russian Jewish Congress. Born in Lviv in Western Ukraine, in 1986, he graduated from the Moscow Institute of Steel and Alloys. From 1986 to 1988 he worked as a design engineer at the Elektrostal plant in the Moscow region. In the late 80s, Fridman started his business. In 1989, he, together with Mikhail Alfimov, German Khan and Alexei Kuzmichyov, created and headed the company Alpha-Photo, which sold computers, photo and copy equipment. In 1990, he founded the Soviet-Swiss joint venture Alfa-Eco, engaged in the export of oil and metals. Based on Alfa-Eco, they created the Alfa Group. In 1991, Fridman founded Alfa Bank.

From 1995 to 1998, Fridman was in the Board of Directors of Public Russian Television (ORT). In 1996, Alfa acquired the shares of SIDANCO Oil Company, and Fridman became a member of its Board. In the early 2000s, Alfa Group included the assets of the oil company TNK-BP, Vimpelcom (Beeline) and the Perekrestok trading house (X5 Retail Group). Thus, Alfa Group became one of the most powerful financial-industrial groups of Russia. Mikhail Fridman also owns the LetterOne Holdings group, which includes the assets of the German oil and gas company DEA, 56.2% of VEON (formerly Vimpelcom), and 13.22% of Turkcell — the leading Turkish mobile operator. With a net worth of more than $15 billion, Fridman is now Russia’s seventh-richest man.

The media has repeatedly reported that Alfa Group has close ties with the Kremlin. So, Vladislav Surkov, who he worked for Friedman and Alfa Group (in 1996–1997 — First Deputy Chairman of Alfa Bank, in 1998–1999 — First Deputy General Director, Director of Public Relations of Public Russian television) has been holding the post of Deputy Head of the Presidential Administration of the Russian Federation and other senior governmental positions since 1999. Alexander Abramov who headed the Alfa Bank GR department and was Deputy Chairman of the Board since 1999, served as deputy head of the Presidential Administration. Later, he was Secretary of the State Council of the Russian Federation and Assistant to the President of the Russian Federation.