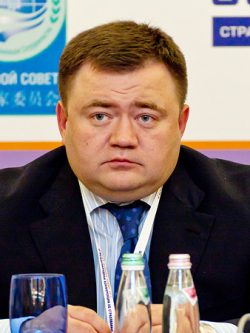 FRADKOV, Peter (Pyotr) Mikhailovich (b. 1978 in Moscow) graduated from the Moscow State Institute of International Relations in 2000 with a degree in world economics. The first job of a young MGIMO graduate was the position of the head of the department, deputy representative of Vnesheconombank of the USSR (VEB) in the United States.

In 2004, Fradkov Jr. was appointed deputy general director for the Moscow office of the Far Eastern Shipping Company, a Cypriot offshore company controlled by Russian officials. In 2005, he returned to work at Vnesheconombank, becoming the director of the department and the first deputy director of the directorate of the state bank. Since January 2006, he also became director of the structured finance department of VEB. In June 2007, he became a Member of the Board and Deputy Chairman of a renewed Vnesheconombank. In the same year, he graduated from Kingston University Business School in London and the Academy of National Economy in Moscow.

In 2007, he joined the board of directors of Aeroflot's subsidiary, Terminal OJSC, which was created to build the third terminal at Sheremetyevo Airport. Since 2011, he has been Director of the Russian Agency for Export Credit and Investment Insurance. In January 2015, he was appointed First Deputy Chairman and Member of the Management Board of Vnesheconombank. In 2015, he took up the post of General Director of the Russian Export Center. In June 2016 left the Board of VEB.

On April 24, 2018, Fradkov was appointed head of the interim administration of Promsvyazbank, whose main specialization is government’s defense orders and large public procurement. On September 6, 2018, he was elected Chairman of Promsvyazbank PJSC. Fradkov Jr. is a professor at the Department of International Business of the Faculty of World Economy and International Affairs at the National Research University-Higher School of Economics.

Purposeful violation of the regime of international sanctions, nepotism, national and cross-border corruption.

In Russia under Vladimir Putin, it has already become a tradition to grant to the children of the KGB elite with tidbits of an extremely overgrown public sector. So the son of the former Prime Minister and chief intelligence officer, Peter Fradkov, has spent his whole life in senior positions in state and state-controlled corporations, free from fair market competition.

It is noteworthy that Fradkov Jr. headed Promsvyazbank after its de facto raider seizure by the state. Once one of the most successful private banks in Russia, created by technology entrepreneurs and philanthropists, the Ananyev brothers, faced the artificially impracticable requirements of the Central Bank to expand reserves in 2017. In December 2017, the Central Bank began a reorganization of Promsvyazbank, and it was nationalized. After that, the main specialization of the bank became Russian military contracts and dubious public procurement transactions.

According to the head of VTB Andrei Kostin, it is in Promsyazbank that is going to accumulate most of the operations with enterprises and individuals under US and EU sanctions. By mid-February 2019, the bank began to receive the first military loans following the government decree to avoid the sanctions risks against the largest Russian banks, the total amount of which was estimated at 1 trillion rubles. Using the status of a military-defense bank, it does not disclose quarterly reports, which can serve as a cover for corrupt and dubious schemes. In March 2018, Ukraine imposed sanctions against Promsvyazbank.