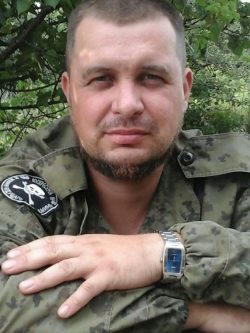 Fighter of the pro-Kremlin illegal armed formations of the so-called “DPR” and “LPR”, participant in the full-scale military aggression of the Russian Federation against Ukraine (after February 24, 2022), “war correspondent”, propagandist, professional pseudonym – “Vladlen Tatarsky” (borrowed from one of the novels by the Russian writer Viktor Pelevin). Participates in the role of "expert" in various TV shows on Russian television, for example, in the program "Time Will Tell" on Channel One. He maintains his own Telegram channel and part-time video blog "Evening Vladlen".

Born in 1982 in the town Makeevka (Donetsk region, Ukrainian SSR). After leaving school in 1999, he worked in a mine, then sold furniture at a local market, then opened several shops. In 2011, as part of a criminal group, he raided one of the local banks, after which he was arrested and sentenced to imprisonment in a penal colony in the city of Gorlovka.

In 2020, Fomin resigned from the so-called "people's Militia of the DPR" and moved to Moscow, starting media activities.

With the start of a full-scale invasion of Ukraine in February 2022, he created his own telegram channel “Evening Vladlen”. At the same time, he again returned to the “Vostok” battalion of the so-called "DPR", participated into the invasion of the Kharkiv region and in the destruction of Mariupol.

Fomin is the author of the books "Running", "War" and "Meditation".

He was married twice and has a son from his first marriage.

Direct participation in a full-scale military aggression against Ukraine (including in such egregious episodes of this aggression as the destruction of Mariupol), as well as in the propaganda of this aggression and of other war crimes.
The activities of Maxim Fomin as a militant and war criminal are openly recorded by him in a large number of interviews, biographies, etc.

As for his propaganda activities, "Vladlen Tatarsky" is known in the public sphere for the following:

• calls to “be proud” of the genocide in Bucha and to commit even greater atrocities in Ukraine ;
• calls for strikes against Ukraine's civilian infrastructure and destruction of power plants so that more Ukrainians die in hospitals ;
• public support for war crimes by militants of the so-called "DPR" and "LPR" and military personnel of the Russian army, for example, for killings of prisoners of war ;
• and finally, a phrase that does not need any comments: "... we will defeat everyone, kill everyone, rob everyone we need - everything will be as we like ".

Thus, it is obvious that Maxim Fomin is an active accomplice of the Kremlin’s war crimes on the territory of Ukraine – both during the period of the “hybrid” invasion of the Donbass in 2014-2022, and during the period of the full-scale invasion of the Russian Federation into Ukraine starting from February 2022. In addition, the openly misanthropic propaganda activities of Maxim Fomin directly contradict both international law (in particular, Article 20 of the International Covenant on Civil and Political Rights of 1966), and, at a minimum, the criminal law of the Russian Federation (Article 354 of the Criminal Code of the Russian