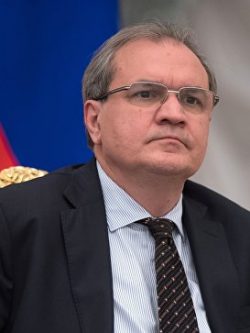 TV Presenter, Advisor to the President, Chairman of the Presidential Council for the Development of Civil Society and Human Rights, Secretary of the Public Chamber of Russia.

FADEEV, Valery Alexandrovich (b.1960) is a Russian propagandist heading the Presidential Council for Human Rights. Born in Tashkent, he graduated from the faculty of management and applied mathematics of the Moscow Institute of Physics and Technology in 1983. In the 1980s, he developed his scientific career, and in 1990 he became a senior fellow at the Institute for Market Problems of Soviet Academy of Sciences. He soon turned into a media manager. He was a scientific editor of Kommersant-Weekly magazine in 1992–1995, editor-in-chief of Expert Magazine (1998–2017) and news presenter at Channel One (2014–2018), including the Sunday “Time” newscast (from September 4, 2016, to June 10, 2018). Since 2006, Fadeev has been the CEO, co-owner of Mediaholding Expert.

In 2006-2014, Fadeev was a member of the Public Chamber of the Russian Federation — an advisory body to the President. Since October 20, 2011, he has been Chairman of the Expert Council of the Agency for Strategic Initiatives. In 2012, he became one of the trustees of Vladimir Putin as a candidate for President. Valery Fadeev is a member of the Supreme Council of the ruling United Russia party. In March 2017, Fadeev became Secretary of the Public Chamber. On October 21, 2019, he was appointed Advisor to the President of the Russian Federation and Chairman of the Presidential Council for the Development of Civil Society and Human Rights.

The regime advocacy, the propaganda of a hybrid war against Ukraine, profanation of public interests.

Once considered a moderate liberal, the Expert Magazine turned into one of the main mouthpieces of “sovereign democracy” under Valery Fadeev — an intermediate step towards dictatorship in Russia. In 2005, the magazine became one of the founders of the publishing house “Europe”, which, however, had little in common with the European choice of Russia and published mainly anti-Western and anti-opposition propaganda. During the Kremlin’s aggression against Ukraine, the magazine and its Editor-in-Chief in particular actively supported hybrid warfare against a neighboring country.

In June 2014, the magazine came out with the cover “Donbas — the heart of Russia” and an article by Fadeev and Vitaly Leibin, editor-in-chief of the Russian Reporter magazine, entitled “We Will Not Quit Them”. The authors proposed a new plan for further destabilization in Eastern Ukraine and its gradual accession into Russia. The article contained the characteristic anti-Ukrainian vocabulary (“Novorossia”, “self-organized militia”, “Kyiv’s punitive operation”, “Right Sector thugs”, etc.) and proposed the following steps of “Russian assistance to Donbas”: “organization of the militia” and its armed support; “humanitarian” assistance; propaganda work with the local population; search for allies with real management experience; the creation of a separate financial system for the breakaway regions; extensive Russian investments.

As the Sunday prime-time news presenter on the main government-controlled channel and the member of the ruling party, Fadeev himself did an Orwellian propaganda work. He told blatant lies about the Russian opposition (“Navalny wants to become the main non-systemic opposition leader, and therefore, to reallocate the money that comes from abroad, primarily from the United States. It’s a lot of money, tens of billions of rubles a year”), about the West (“The fastidious West is mistaken. It can no longer dictate terms to the whole world”), Russia’s neighbors (“Saakashvili has always been an American puppet”, “Everyone understands everything. The radical Nazis are advancing, and Poroshenko is retreating”), and admired Putin’s successes (“The economic crisis in Russia has finally been overcome. There is no doubt about that”, “Vladimir Putin won the presidential election like never before”). In April 2017, Fadeev analyzed the “conspiracy” of Mikhail Khodorkovsky and French President Emmanuel Macron with the Rothschild family in his newscast. Ironically, he reproduced a fragment of a Nazi German film in the program.

Currently, Valery Fadeev is Chairman of the Council for Human Rights and the Public Chamber — advisory bodies lacking real powers. The Public Chamber, reconstructed in 2006, was created to channelize public discussion in an extra-parliamentary, safe form for the government. According to independent human rights advocates, the effectiveness of the Chamber's activities and the quality of its annual reports on human rights and the development of civil society is extremely low. The appointment of the propagandist Fadeev as the Secretary of the Public Chamber and the Chairman of the Human Rights Council indicates that the Kremlin doesn’t need to imitate civil dialogue anymore, and these bodies have finally become the elements of the decorative facade of the dictatorship.

Putin sacks head and others in Kremlin human rights body