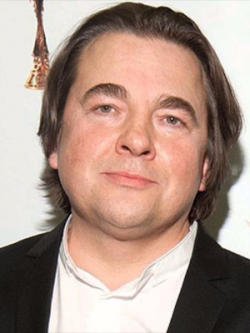 ERNST, Konstantin Lvovich (b. 1961) graduated from the faculty of zoo engineering at the Moscow Agricultural Academy in 1983, while his father was the vice-president of the academy. He worked at the research institute, where he was the secretary of the Komsomol branch. He soon got a job at Videofilm Cooperative, where he shot the documentary Radio Silence about the musician Boris Grebenshchikov. In 1989-1989, at the invitation of Alexander Lyubimov, he worked as an interviewer, screenwriter, and director in the TV program Vzglyad on the Central Television of the USSR. From 1991 to 1995, he hosted the program on culture Matador, which aired on Central Television, then on the Ostankino Channel and the ORT channel. From 1995 to 1998, he published a magazine under the same name.

From 1995 to 2001, he was the General Producer, and since 1999, he has been the General Director of Public Russian Television (ORT) and Channel One at the suggestion of Boris Berezovsky and Valentin Yumashev. Since May 2002, he has been a member of the National Academy of Motion Picture Arts and Sciences. In 2009, he was deputy chairman of the organizing committee for the Eurovision Song Contest in Moscow. In 2014, he was the chief screenwriter and creative producer of the opening and closing ceremonies of the Sochi Winter Olympics.

Complicity in organizing aggressive propaganda of the Putin regime.

The main basis for Ernst’s accusation is his official position as the head of one of the largest Russian media structures, which has been actively used for propaganda purposes for many years. He deliberately exchanged high authority in the professional media environment for absolute loyalty to the Putin regime, becoming one of his accomplices and beneficiaries.

Ernst was a key participant in the operation to deprive Boris Berezovsky of control over ORT during the period of Vladimir Putin’s strengthening of power in 2000 and the subsequent transformation of the channel into one of the main tools of state propaganda in Russia. In a testimony given in the High Court of London during the discussion of Berezovsky’s lawsuit against Abramovich in 2011, former head of the Presidential Administration Alexander Voloshin explained: “Everything was done within a week. Ernst was informed that [Berezovsky] was gotten rid of any influence. Ernst, I can say, was happy.”

Ernst is the author of the idea, screenwriter, and producer of the series of social advertising videos Russian Project and the concept of the TV show Old Songs About the Essentials. According to the experts, these TV shows have become one of the most effective tools for promoting nostalgia for the USSR. It made the tasks of establishing and strengthening the authoritarian system of power in Russia, instilling the chauvinistic ideology, and distracting public opinion from internal problems much easier.

Ernst’s First Channel made a significant contribution to advocacy for acts of international aggression by the Russian regime and crimes against humanity, including the war with Georgia, the occupation and annexation of Crimea and military operations in southeastern Ukraine, the downing of MH-17 flight, the assassination of Litvinenko, an attempt on the Skripals, etc.

In 2014, the Security Service of Ukraine approved the request of the National Council of Ukraine on Television and Radio Broadcasting to ban 49 employees of the Russian media, including Ernst, from entering Ukraine.

On May 27, 2016, Konstantin Ernst, along with other leaders of the major Russian state and pro-Kremlin media, including NTV, VGTRK, TASS, Rossiya Segodnya, Regnum, Rossiyskaya Gazeta, and others, was included in the list of personal sanctions by order of the President of Ukraine. Konstantin Ernst was charged with “actions that create real and/or potential threats to national interests, national security, sovereignty and territorial integrity of Ukraine, contribute to terrorist activities and/or violate the rights and freedoms of humans and citizens, the interests of society and the state, lead to the occupation of the territory, expropriation or restriction of property rights, violate full implementation of rights and freedoms by citizens of Ukraine.”

In Russia, there is a view of the special role of Channel One and its leader, who is allowed a little more freedom. According to the majority of independent media analysts, this is a deliberate decision of the authorities, which aims at a wider reach of the audience and the implementation of more sophisticated propaganda tools, in contrast to the straightforward, aggressive methods used on NTV, VGTRK, and other channels.

The testimony of the TV critic Slava Taroshchina: “The primitive level of the current politicization has bothered both the top and bottom [of the society]... We have repeatedly said that the empire of Ernst has always been in a special position. Even when a wave of insane forced politicization took over all of television, Ernst managed to stay away for a long time. Then, when “mobilization rhetoric,” to use Prokhanov’s expression, hit the country, it became clear: no one could sit in the trenches. The propaganda seized the channel, poorly adapted to it.”

The testimony from blogger Alexei Pestov: “Brainwashing is taking place with renewed vigor: they used to talk about Ukraine, now mainly about Turkey and Syria. Most of the news is driven by the idea that Americans and Europeans, especially the former, are not humans. We are in the ring of enemies and must fight back while forgetting about internal problems.”

On September 29, 2017, the Variety included Konstantin Ernst in the Top 500 Most Influential People in the World of Show Business.

Indirect evidence of Ernst's complicity in the crimes of the Putin regime is his receipt of the highest state awards, including the orders For Services to the Fatherland (IV, III and II degrees), the Order of Friendship (“for objective coverage of events during the armed aggression of Georgia against the South Ossetia in August 2008”), letters of appreciation and prizes from the government and the President of the Russian Federation, as well as the medal “To the participant of the military operation in Syria” (“for high professionalism and objectivity in covering the military operation in the Syrian Arab Republic”).