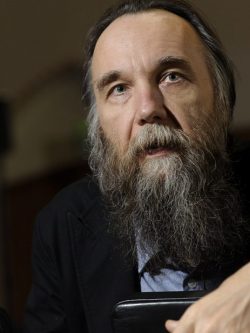 DUGIN, Alexander Gelyevich (b. 1962) is a founder and leader of the International Eurasian Movement. In 2003, he created the Eurasian Union party, whose policy documents are “a symbiosis of traditionalism, fascism, national socialism.” From 2008 to 2014, he was a professor at MV Lomonosov Moscow State University, Director of the Center for Conservative Studies at the Faculty of Sociology of Moscow State University. He was the editor-in-chief of the Tsargrad TV propaganda channel from 2016 to 2017 and a member of the ultranationalist Izborsk Club. He is included in the U.S., EU, and Canada sanctions list against those responsible for Russian military aggression against Ukraine. Alexander Dugin is a persona non grata in a few post-Soviet countries.

Promoting hatred and enmity, calling for an aggressive war.

Alexander Dugin is a Russian chauvinist politician, propagandist, Ukrainophobe, founder and leader of the International Eurasian Movement. He is one of the main ideologists of “imperial Russia,” one of the authors of the concept of the “Russian world” and the so-called “Novorossiya.” Many political scientists consider his views as fascist. He is also considered to be one of the key ideologists of the Kremlin’s foreign policy.

In 2014, he publicly called for the mass killing of Ukrainians. In one of his publications, Dugin, commenting on the actions of Russia in the Donbas, he said, “Our behavior is disgusting. If you started to kill, then kill, if you don’t want to kill, then go away. Why one has to spoil everything?” In one of his appeals, Dugin said, “Ukrainians need to be killed, killed and killed, as I say to you as a professor.” After that message and a public campaign for his dismissal from the Moscow State University, he became too toxic to keep him at the teaching position and he was fired. However, he soon found himself at the infamous Tsargrad TV channel, well-known in Russia for the dissemination of fake news and belonging to Konstantin Malofeev, an “Orthodox oligarch” with strong ties to the Kremlin.

Alexander Dugin: The Crazy Ideologue of the New Russian Empire

The Palingenetic Thrust of Russian Neo-Eurasianism: Ideas of Rebirth in Aleksandr Dugin’s Worldview

Aleksandr Dugin: A Russian Version of the European Radical Right?