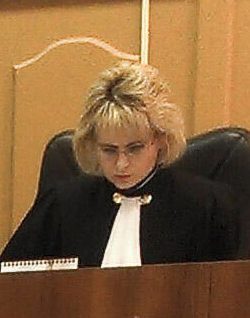 Judge of the Basmanny District Court of Moscow (2004 - to date)

DUDAR, Natalia Nikolayevna (b. 1974) is a Moscow judge known for numerous politically motivated verdicts. Like most of her colleagues, Natalia Dudar began her career in court with secretarial work. In October 1999, she was appointed a criminal judge of the Basmanny District Court of Moscow. In 2004 she defended her Ph.D. thesis at the Moscow State Law Academy. In 2019, experts from the Dissernet community found a large amount of plagiarism in her work.

In 2013, he recognizes the legitimacy of the criminal case against Alexei and Oleg Navalny and authorized wiretapping of five employees of Navalny’s Anti-Corruption Foundation. She fined the human rights information-analytical center Sova for 300 thousand rubles for refusing to voluntarily register as a “foreign agents”. In 2015, she sentenced activist Ildar Dadin to 3 years in a colony for participating in protests.

Natalia Dudar continued political persecution of opposition activists in the Moscow Case too. Note that it is a case against participants of peaceful rallies in Summer 2019 against non-registration of independent candidates to the Moscow City Duma election. On September 25, 2019, Dudar extended the house arrest of a student of the Higher School of Economics Yegor Zhukov, the defendant in the Moscow case, and the detention of another defendant, Samariddin Rajabov, for two months. Judge Natalya Dudar agreed with the arguments of the investigation that they could “continue to engage in criminal activities or destroy evidence”.