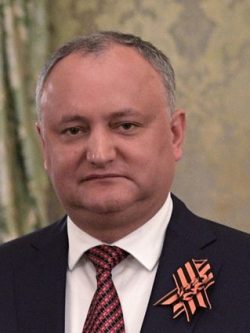 DODON, Igor Nikolayevich was born on February 18, 1975, in the village of Sadova, Kalarash district, Moldavian SSR. He graduated from the Faculty of Economics of the State Agrarian University, the Faculty of Management of the Moldavian Academy of Economic Knowledge, and the Faculty of Economic Law of the International Institute of Management. Between 1997 and 2001, he held the position of Leading Specialist of the Clearing Department, the Listing Department, the administrator of the electronic trading system and the Director of the Department of Marketing, Listing, and Quotations of the Moldova Stock Exchange. From 2001 to 2005, he was Chairman of the National Securities Depository of Moldova. From 2003 to 2005, he served as chairman of the Universal Commodity Exchange of Moldova.

His career grew rapidly not only due to the considerable economic education but also to membership in the Communist Party of the Republic of Moldova (PCRM), which came to power in 1998. From 2005 to 2008, Dodon was Deputy Minister, and then Minister of Trade and Economy of the Republic of Moldova. In 2008, Dodon was appointed First Deputy Prime Minister for Economics and Trade by decree of the President of the Republic. In those days, he advocated the signing of a free trade agreement between the European Union and Moldova and advocated for European integration.

In 2009, Dodon became a member of parliament from the Communist Party of the Republic. He ran for the mayor of Chisinau in 2011 but lost to Dorin Chirtoaca. After that, he left the faction and, together with his associates Zinaida Greceanîi and Veronica Abramciuc, joined the Socialist Party (PSRM) and in the same year became its chairman. Around the same time, Igor Dodon began to change his political course. He started to abandon European ambitions, criticize Western institutions and show loyalty to the policies of Russian President Vladimir Putin. When Dodon’s party received more than 20% in the parliamentary elections of 2014, he left the government of European integrators. He became the organizer of anti-government protests in 2016, advocated for holding early elections. On November 13, he was elected president of the country.

Igor Dodon made his first international visit as president of Moldova to Moscow, thereby indicating his intention to make relations with Russia strategic. Dodon has repeatedly stated that he is a supporter of the federalization of Moldova and the abolition of the association agreement with the European Union, a supporter of the country's accession to the EAEU and against joining NATO. On October 30, 2016, Dodon said that the illegally annexed Crimea belongs to Russia. The Minister of Foreign Affairs of Moldova had to denounce the words of Dodon. Dodon was the only foreign leader to come to the May 9 parade in Moscow in 2017.

Since Moldova is a parliamentary republic, the government is formed not by the president, but by the parliament, where the majority belongs to the pro-European coalition, therefore Dodon’s position regularly conflicts with the government on important issues. Constitutional Court of the country has already suspended his duties five times since 2016. So, on January 5, 2018, it suspended Dodon’s powers when he refused to sign the Law on Combating Foreign Propaganda twice, adopted by parliament at the end of 2017. This law was aimed primarily against the dominance of Russian propaganda in the context of Russian aggression in Ukraine in interference in elections in many post-Soviet countries, as well as in the EU and the USA. Dodon opposed the ban on entry into Moldova of the Russian propagandist Irada Zeynalova, employees of NTV, Rossiya-1, and the infamous Zvezda TV channel owned by the Russian Ministry of Defense.