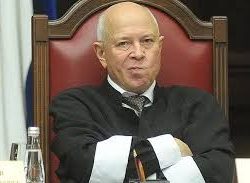 DANILOV, Yuri Mikhailovich (b. 1950) graduated from the Law Faculty of Voronezh State University in 1976. After graduation, Danilov served as People's Judge of the Povorinsky District of Voronezh Region. Since 1980, he was a judge and then became chairman of the Voronezh Regional Court. He was a member of the CPSU and instructor of the Voronezh Regional Committee of the CPSU. In 1989, Yuri Danilov became the first deputy head of the Department of General Courts of the Ministry of Justice of the USSR. In 1991-1992 he was Deputy Minister of Justice of the USSR. From 1992 to 1993, he was the chief lawyer and vice president of the International Food Exchange in Moscow. From 1993 to 1994, Danilov served as Deputy Chairman of the State Committee for Antimonopoly Policy and Support for New Economic Structures.

Complicity in the constitutional coup.

Judge Danilov previously allowed himself to make dissenting opinions, particularly when he objected to the bill at rallies in 2012, which significantly increased fines for violations at rallies, introduced mandatory work for violators, forbade people from coming to rallies in masks and imposed penalties for organizing unauthorized demonstrations. However, he, unlike his colleague Konstantin Aranovsky, signed under the approval of Putin's amendments to the Constitution in 2020, and thus bears responsibility for the legalistic design of a personalist dictatorship in Russia.

Recall that in 2020, during the hasty passing of Putin's amendments to the Basic Law, the Constitutional Court acted as the legalizer of the coup. On March 10, United Russia MP Valentina Tereshkova proposed lifting restrictions on the number of presidential terms or allowing re-election of Vladimir Putin to the presidency (“nullifying” the number of terms already held by him as president). Putin, who suddenly appeared at a meeting of the Duma, supported Tereshkova’s statement but referred to the need to obtain a Constitutional Court opinion on the conformity of the amendments to the current Constitution. Already after two days of consideration, the Constitutional Court almost wholly recognized the legality of “nullifying,” although in 1998, considering a similar case, it had forbidden President Yeltsin to run for the third time in a row. It is noteworthy that the judges explained the new decision by the “special clause” included in the Basic Law which had been absent earlier, which takes into account certain “historical factors <...>, including the degree of threats to the state and society, the state of the political and economic systems.” According to many experts and analysts, allowing Putin to remain president after 2024 was the main goal of the whole venture with the amendments.