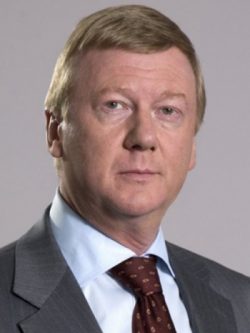 Chairman of the Management Board of Rosnano

CHUBAIS, Anatoly Borisovich (b. 1955) graduated from Leningrad Engineering and Economics Institute in 1977. Until 1990, he had been working at the institute as an engineer, assistant, and assistant professor. He was a member of the ruling Communist Party of the Soviet Union (CPSU) from 1978 to 1990 and left the party after the abolition of the 6th article of the Soviet Constitution on the leading and guiding role of the CPSU. In 1987, when Soviet decided to switch to a policy of partial political reforms of the Soviet system called Perestroika, Chubais headed a club of the Soviet intelligentsia of the same name in Leningrad. Note that then Perestroika clubs appeared in all major Soviet cities with the full assistance of the party apparatus.

At first, Chubais and his young economists were not supporters of the capitalist economic system in Russia, and they advocated for the so-called “Market socialism” of the Yugoslav or Hungarian type. Only in 1990, when the socialist camp ceased to exist, and in the dying USSR there was no time for cautious Eastern European experiments, Chubais's views shifted in favor of a market economy of the Western European and American type.

In March 1990, representatives of Democratic Russia won the election to the Lensoviet. On the initiative of its representatives, Chubais was appointed deputy chairman of the City Council Executive Committee, that is, he became vice-mayor of the second-largest city in the USSR. Anatoly Sobchak became the head of the Leningrad City Executive Committee. The main task at the new post for Chubais was the creation of the Leningrad Free Economic Zone. However, this idea basically could not be realized in the conditions of a centralized Soviet economy. Perhaps this is precisely why, when Sobchak was elected mayor of Leningrad in June 1991, Chubais was seriously demoted and became the ordinary adviser to the mayor on economic issues.

Chubais’s ideas on a radical revision of the economy, which were never welcomed by the Soviet leadership, a year and a half later, in November 1991, were most welcome for the new Russian leadership, headed by President Yeltsin and acting Head of the Government of the Russian Federation and Chubais’s friend Yegor Gaidar. So, on November 10, 1991, Chubais was appointed the head of the State Property Management Committee and was given a task to urgently prepare most of the state-owned enterprises for privatization. Since June 1992, Chubais’s authority has grown and he also became Vice Prime Minister of the Russian government for economy and finances.

The Gaidar-Chubais reforms were rather poorly thought out: so, at first, on January 1, 1992, while maintaining the key role of the state in the country's economy, prices were deregulated and hyperinflation began in the country, which lasted for two years. It was only in the spring of 1992 when the privatization of state property began. Since the population simply did not have money as a result of hyperinflation, this stage of mass privatization completely failed.

Then, a group of economists led by Chubais and Gaidar developed the “voucher privatization.” As a result, 97% of the Russian population received free vouchers with a face value of 10,000 rubles; they were distributed from October 1992 to February 1993. The voucher privatization was completed by mid-1994, giving way to the next stage of monetary privatization, but the vast majority of the population who received vouchers did not become owners of any objects other than their privatized apartments, for which vouchers were not originally required. For most people, the problem of physical survival in conditions of hyperinflation was more relevant, and they simply sold their vouchers.

Privatization continued to be intermittent, and at the end of 1995, on the eve of the presidential election and in conditions of a severe budget deficit, the economic bloc of the government decided to hold the so-called loans for shares scheme. According to observers, this policy ultimately led to the emergence of Russian oligarchs, which, with only a few exceptions, continue to be the main pillar of Putin’s long-standing dictatorial rule in Russia along with special services and propagandists.

The essence of these loans for shares scheme was that the government received loans from several commercial banks, transferring the shares of state enterprises to them. If the state did not repay the loan (and often the government did not have money to return it), the shares became the property of a commercial bank. During the auctions, shares were pledged at low prices, and as a result, a few financial and industrial groups seized large enterprises for basically nothing.

During the 1996 election campaign, Chubais was the leader of the informal campaign headquarters of Yeltsin. After Yeltsin was elected for a second presidential term in the summer of 1996, he gradually expanded the powers of his administration (for example, by giving it the right of a legislative initiative) and appointed Chubais as its head.

In March 1997, Yeltsin appointed Chubais as First Deputy Prime Minister and Minister of Finance of the Russian Federation. On November 20, 1997, Chubais was dismissed at his own request (due to the scandal over his receipt of a fee of $90,000 for the then-unwritten book on privatization), but he remained Deputy Prime Minister and left the government only in March 1998 after the resignation of Chernomyrdin’s cabinet.

On April 30, 1998, Anatoly Chubais led the country's largest state monopoly, the Unified Energy Systems of Russia (RAO UES), which was experiencing stagnation and a crisis of non-payments. He implemented the policy of splitting the energy monopoly into naturally monopolistic and competitive sectors. Chubais ultimately achieved his goal: on July 1, 2008, RAO UES ceased to exist, and 23 independent companies appeared in its place.

On September 22, 2008, by decree of Dmitry Medvedev, Chubais was appointed head of the newly formed state holding RosNANO. Thus, he ceased to be a reformer-privatizer, because the state’s policy has changed. Now, privatization gives way for the creeping nationalization of the Russian economy, where the government and its counterparties already control about 70% of the national economy. However, this does not bother him. The scandal with the results of the RosNANO audit by the Accounts Chamber of the Russian Federation in 2013, which exposed a whole series of suspicious transactions of the corporation did not affect his career in any way. The scandal of 2016 with a mansion in Peredelkino near Moscow for $40 million also did not lead to any consequences for Chubais.

Like all other “systemic liberals,” Chubais is ready to serve any government, if only it could find a place for him and any of his projects, including those far from ideas of the free market.

Corruption. For example, it remains unclear for what money Chubais and his wife built a “smart home” in Peredelkino for $40 million.

The economic service for the interests of the Putin regime.