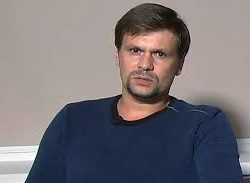 According to a Bellingcat investigation, Anatoly Vladimirovich Chepiga was born on April 5, 1979, in the village of Nikolaevka, Amur Region. His father is Vladimir Maksimovich Chepiga, who in the 1990s worked as a director and was a co-founder of a specialized mobile mechanized column (SPMK) Ivanovskaya in the village of Berezovka, Ivanovsky district of the Amur region, later moved to work in a military unit. His mother is an accountant at one of the enterprises.

The family of Anatoly Chepiga moved to the village of Berezovka, Ivanovsky District, Amur Region, where they lived for a long time. In 1996, Anatoly Chepiga graduated from Berezovskaya high school, and at the age of 18, he entered the Far Eastern Higher Combined Arms Command School (DVOKU), which he graduated in 2001 with honors. After receiving his education, according to The Insider, he was sent to serve in the 14th Special Forces Brigade of the Main Directorate of the General Staff of the Armed Forces of Russia, which later took part in the Second Chechen War. In total, he was on trips to Chechnya three times.

According to The Insider, after 2003, Chepiga moved to Moscow, where he graduated from the Military Academy of the Russian Ministry of Defense. The publication also claims that he served in a unit of the Main Directorate of the General Staff of the Armed Forces (GRU), which was previously discovered by the Ukrainian Internet publication InformNapalm and concludes that Chepiga received the Hero of Russia medal for his participation in the war in Donbas.

Anatoly Chepiga's involvement in poisoning in the UK

According to an investigation by Bellingcat and The Insider, as well as the BBC's Russian service, according to the official database of Russian passports, Anatoly Chepiga and Ruslan Boshirov are one and the same person. “Ruslan Boshirov” and “Alexander Petrov” are accused by the British authorities of the poisoning of Sergei and Yulia Skripal and of the poisoning of Charles Rowley and his partner Don Sturgess, who later died. The British police stressed that “Petrov” and “Boshirov” may not be the real names of these people.

According to Bellingcat, in 2009, Ruslan Timurovich Boshirov and Alexander Evgenievich Petrov, upon receiving new passports “due to the unsuitability” of the previous ones, were registered in the central database of the Federal Migration Service. At the same time, no records of previously issued passports were found in the databases. In the documents of Boshirov and Petrov, a field of biographical data was left empty with a note about a certain attached secret letter, a seal “No information” was put and a telephone number 195-79-66 was entered, registered at the General Administration of the General Staff of the Armed Forces and belonging to the Russian Ministry of Defense. The passports of Petrov and Boshirov differed by one digit and were issued at the department of the Federal Migration Service 770001 in Moscow, where, according to journalists, high-ranking officials and security officials receive their documents.

According to Bellingcat and The Insider, in 2001, Chepiga received a passport, which was issued to him by DVOKU with a place of residence at the military unit of the General Staff of the Armed Forces. In 2003, he received another passport, which is not listed in the database of the Ministry of Internal Affairs for registering invalid documents. According to the findings of the investigation, between 2003 and 2009, Chepiga received the first “fake passport” in the name of Boshirov. According to research journalists, Chepiga's face from the photo of DVOKU graduates, his own in his passport from 2003, Boshirov from 2009, and his own from a passport released by the UK police are similar to each other, adjusted for age. In this regard, the press secretary of the Russian President Dmitry Peskov announced that he would no longer comment on the story. Russian Foreign Ministry spokeswoman Maria Zakharova, in turn, called this data “disinformation” and said that it was easier for journalists to “hack the FMS database” overnight than to get at least one proof of Petrov and Boshirov's involvement in the poisoning. In response to Zakharova's statements, several journalists noted that FMS databases are almost openly sold on radio markets.

On December 19, 2018, the United States imposed personal sanctions against Chepiga, officially associating the pseudonym Ruslan Boshirov with him. On January 21, 2019, the EU imposed personal sanctions against Chepiga (Boshirov). As the reason for the imposition of the sanctions, the EU Council indicated the storage, transportation, and use of the Novichok poisonous substance in Salisbury.

An Officer And A Diplomat: The Strange Case Of The GRU Spy With A Red Notice