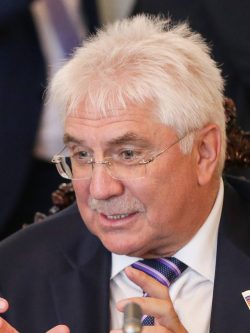 Date and place of birth: November 22, 1955, Kapustin Yar, Astrakhan region. In 1979 he graduated from the Moscow Aviation Institute. Sergo Ordzhonikidze. After graduation, he worked at secret defense enterprises in Moscow and the Moscow region. In the late 1980s. took up entrepreneurial activity. In 1990, he graduated from the Academy of National Economy under the Council of Ministers of the USSR. Since 1991, he has been developing business abroad, in particular, in African countries (Angola, Namibia, Mozambique, etc.). He headed a number of joint ventures. In 1999-2000 and 2002-2010 he was a member of the supervisory board of CJSC JSCB Russian-German Trade Bank A.O. In 2001, he founded the Interregional Agrarian Fund “Fertility.” In 2001-2005, he was a member of the Agrarian Party of Russia. In 2007, he was elected a member of the presidium of the Fair Russia party and chairman of the council for the agro-industrial complex and land relations. In 2008, he was elected secretary of the central council of the Fair Russia party. In 2010, he became the head of the regional branch of the Just Russia party in the Tver region. Since December 2011, he has been a member of the State Duma of the Russian Federation.

Chepa is a co-author of bills restricting the rights and freedoms of citizens:

● Bill No. 1165649-7 On Amending Article 4 of the Federal Law “On Basic Guarantees of Electoral Rights and the Right to Participate in a Referendum of Citizens of the Russian Federation” and Article 4 of the Federal Law “On Elections of Deputies of the State Duma of the Federal Assembly of the Russian Federation” (in terms of limiting the passive electoral right of persons involved in the activities of extremist or terrorist organizations) restrict the citizens recognized as extremists on the basis of politically motivated court decisions the constitutional right to be elected.
● Bill No. 1057892-7 On amendments to certain legislative acts of the Russian Federation (in terms of clarifying the rights and obligations of subjects performing the functions of a foreign agent) restricts the constitutional right of equal access to public service and the right to be elected for some candidates running in elections, recognizing them as “foreign agents” for political reasons and obliging them to indicate this information publicly, which may entail reputational risks.