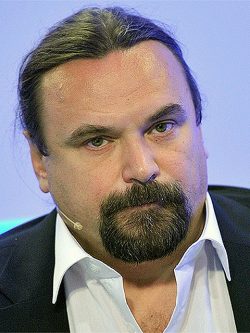 CHALENKO, Alexander (b. 1968 in Donetsk) graduated from the philosophical faculty of Kyiv National University in 1992. In the 1990s, he was a member of the Liberal Party of Ukraine, worked in the online media Part.org.ua and ForUm, was the editor-in-chief of the Internet department of the Social Democratic Party of Ukraine and the program Vote with Mykhailo Pogrebinsky; expert of the Institute of Strategic Planning.

From 2005 to 2010, he wrote for the newspaper Segodnya, then was the chief editor of Revisor.ua. He collaborated with the Observer website, had a blog on Ukrainian Truth, and appeared as an expert on Ukrainian talk shows. After the victory of the Revolution of Dignity, he fled to Russia and received Russian citizenship. He is currently an op-ed columnist on the Russian propaganda sites Ukraina.ru and Russkaya Vesna, and also regularly appears as an expert on Ukraine on various Russian propaganda talk shows.

Incitement of anti-Ukrainian hysteria and dissemination of pro-Kremlin propaganda.

Alexander Chalenko became famous for his anti-Ukrainian and pro-Putin statements while still living and working in Ukraine. Before the armed intervention of Russia in Ukraine, this was only a domestic political issue of a neighboring country. However, his active role in the propaganda buildup of the Russian audience against Ukraine highly likely played a role in unleashing and maintaining the bloody conflict in the Donbas and the participation of Russian mercenaries in it. Chalenko and other anti-Ukrainian propagandists are to blame for hundreds, if not thousands, of human lives, as well as artificially inflated hostility between two once-friendly nations in the interests of a narrow group in the Kremlin.

Shortly after the victory of the Revolution of Dignity in Ukraine, Chalenko fled to Moscow, where he joined a chorus of pro-Kremlin propagandists talking about “Nazi atrocities in Ukraine.” From Moscow, Chalenko urged militants of the pro-Russian puppet administrations in eastern Ukraine to dismantle monuments to Ukrainian historical figures, prohibit “advertising salo,” and ban Ukrainian national dress. Moreover, he actively promoted the Kremlin’s narrative “Ukraine doesn’t exist anymore.” “Ukraine did not exist as a state before and does not exist now. This is a completely artificial formation. The split in society has been brewing for a long time. So it happened in 2014. Nothing can be glued together.” Assumingly, such anti-Ukrainian propaganda among Russians played a role in the participation of Russian mercenaries in military operations against Ukraine since 2014.

From the very beginning, Alexander Chalenko supported pro-Russian militants in eastern Ukraine, met with them several times and visited the occupied territories. It is noteworthy that his support for individual militants, for example, Igor Girkin, Alexander Zakharchenko, and Alexander Bednov, fluctuated following the Kremlin’s agenda. It is difficult to suspect Chalenko of consistency. He either “trolled” opponents with a portrait of Stalin-Dzhugashvili, then used the word “Stalinist” as a stigma, then complained about the dominance of “Soviet people” in eastern Ukraine, then showed off with communist symbols.

Alexander Chalenko is wanted by the Security Service of Ukraine in the Kharkiv region on charges of committing a crime under Part 1 of Article 110 of the Criminal Code of Ukraine (encroachment on the territorial integrity and inviolability of Ukraine). In Russia, Chalenko complains that “the press, if not all, then most of it” is captured “by Western liberals.”

It is sad when Russia attracts political crooks who are temporarily useful for corrupt ruling circles, while in the longer term, these people cause significant harm to the people of Russia. By realizing their imperial fantasies, such people as Chalenko isolate the people of Russia from modern Western civilization, pit them off against their closest neighbors and immerse them in ignorance and dictatorship. Is this not real Russophobia?