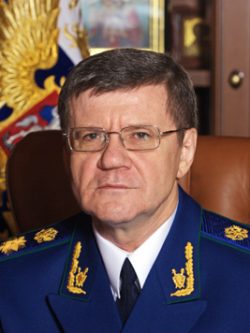 For many years, Yuri Chaika has been one of the closest associates of Vladimir Putin. Under the leadership of Yuri Chaika, the Prosecutor General’s Office has become one of the main punitive bodies of Putin's regime, used as an instrument for suppression of the opposition. As an obedient servant of the ruling regime, Yuri Chaika is consistently pursuing Putin’s policy aimed at suppressing civil rights and freedoms, eliminating the independent media, destroying the opposition, and concentrating the country’s large property in the hands of the President’s inner circle. He and his family members have themselves faced numerous allegations of corruption. In December 2015, one of the leaders of the Russian opposition, Alexei Navalny, published a thorough investigation on Yuri Chaika and his family’s ties with organized crime.

The Office of the Prosecutor General of Russia has also been busy suppressing religious freedoms in Russia. In 2017, Chaika himself headed the prosecution against the Jehovah’s Witnesses, finally declaring the organization extremist and banning it within the Russian Federation. In December 2017, the US Treasury announced sanctions against Yuri Chaika’s son, Artem Chaika, under the Global Magnitsky Act.

Yuri Chaika has repeatedly spoken out against opposition protests. In 2012, he claimed that protest rallies against the rigged elections held in December 2011 were paid for by foreign agents. In the summer of 2019, when opposition candidates were barred from participation in elections to the Moscow City Duma, a new wave of peaceful protests started. In response, the Prosecutor General demanded heightened supervision of the September elections, to prevent “unlawful protests” in Moscow by “firmly suppressing violations using the full range of response measures.” Following the instructions, Moscow prosecutors have opened several criminal cases against protestors. One of them, Sergei Abanichev, was charged for having thrown a paper cup at a police officer. Another participant, a blogger and political science student, Egor Zhukov, was charged with rioting on the basis of a video where he directs protesters away from a police cordon. Such disproportionate responses indicate the Kremlin’s willingness to use any measures to prevent uncertainty ahead of the presidential election in 2024.

Yuri Chaika is included in the report "1500 warmongers" compiled by the Free Russia Forum. The report contains the names of Russian public figures, military commanders, members of the parliament, propagandists, artists and athletes who have publicly spoken out in support of Putin's aggression or are directly involved in it. The Free Russia Forum is seeking sanctions against them in the European Union.