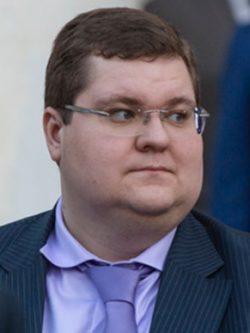 CHAIKA, Igor Yuryevich (b. 1988 in Moscow) graduated from Moscow State Law Academy in 2011. In 2008, in his second year in college, he started a business. He became a co-founder of the financial and credit company Dealsa, then several other enterprises, including Aqua Solid and Golden Age Company. In 2010, he registered the Innovation of Light company, which received several state orders for New Year decoration and lighting facilities in Moscow and the Olympic infrastructure in Sochi.

In 2012–2013, he was a partner of the lawyer Dmitry Yakubovsky and VTB Bank in the development company City Land Group. In 2013, he controlled the Swiss law firm F.T. Conseils. In March 2015, he sold a 40% stake to his brother Artem. In 2014–2015, he was the Advisor to the Governor of the Moscow Region on sports, culture, tourism and youth affairs. In 2016, he established the Russian Export company. In 2017, Igor Chaika established the construction company Archplay Development together with Alexander Ponomarev. Later, the brother of the President of Moldova, Alexander Dodon, received a stake in the company.

The Chaika family clan is one of the most vivid and cynical examples of the criminal-corruption nature of the authoritarian regime in Russia under Putin since not just an official participated in the formation of this business empire, but the highest state official responsible for the rule of law, the Minister of Justice and Attorney General.

According to FBK, “Igor Chaika is the most important link in the family business of the Prosecutor General, he controls companies with a turnover of 300 billion rubles and is fully incorporated into the business of his older brother. His own business is going well. His passion for urbanism is explained by the fact that he makes money in this area, through firms that are directly owned or controlled by him. However, there is an important difference between the businesses of the Chaika brothers. If the elder brother Artem seizes the assets he is interested in without ceremony, then the younger, Igor, chose a different model, he makes money on the public procurement.”

Igor Chaika’s interests include the development of residential and commercial real estate in Moscow and the annexed Crimea, food supplies to China, Russian Railways contracts, as well as the waste disposal business.

One of the main sources of well-being for the sons of the former Prosecutor General is Russian Railways. In 2014, T-Industry JSC related to Chaika acquired from Russian Railways for 3 billion rubles 50% of Beteltrans OJSC, the largest producer of sleepers in Russia. At the end of March 2017, Igor Chaika’s companies grew its stake in Betaltrans to 75%. According to RBC, a company associated with the youngest son of the Prosecutor General got a multi-billion dollar contract for the removal of garbage in the districts of Moscow for 15 years.

In 2015, Alexei Navalny’s FBK released the investigation film Chaika, in which he presented a large-scale picture of the criminal and corruption ties of the Chaika clan, confirming the accusation that “Artem and Igor earned tens of millions of dollars using the ties with friends and subordinates of his father, the Prosecutor General of Russia Yuri Chaika. For the past 15 years, they have been controlling legal and illegal businesses throughout Russia, extracting a profit sufficient for investments of any size.”

In August 2015, Igor Chaika received the Certificate of Merit of the President of the Russian Federation “For Merits in the Implementation of Effective Projects of Innovative Development of the Moscow Region and Active Public Activities.” In June 2016, the name Igor Chaika was replaced with the ЙФЯУ9 encoding in the Russian Federal Register.

The Russian Export company, founded by Chaika in 2016 together with an adviser to the Governor of the Moscow Region Artem Semenov and his wife Anna Barysheva, has become one of the largest wholesale exporters-integrators working with China. Later, they created the online platform Dakaitaowa, which received 300 million rubles from the state Russian Direct Investment Fund (RDIF).

Igor Chaika conducts large-scale business in the occupied Crimea, ignoring international sanctions. In 2017, he became the founder of the construction company UBK. In March 2018, information appeared that he plans to build or buy a hotel complex for subsequent reconstruction on the southern coast of Crimea. According to Radio Liberty, “Chaika is considering the possibility of acquiring the Zori Rossii sanatorium in Crimea, owned by the Russian President’s Administrative Offices, in Crimea.”

In September 2019, Igor Chaika and the brother of the President of Moldova, Alexander Dodon, became co-owners of the Industrial Ecological Operator. The company will collect and process industrial waste, including radioactive waste. The share of the owner of one of the largest Charter recycling operators, Igor Chaika, in the capital of Industrial Ecological Operator is 40%, and the share of Alexander Dodon is 10%. 50% belongs to the business partner of Igor Chaika, Alexander Ponomarev.