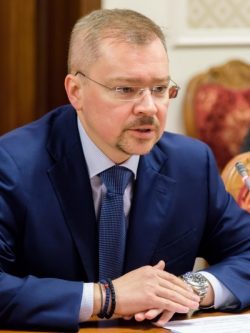 Russian lawyer and businessman. Attorney at the Chaadaev, Kheifets and Partners Bar Association. The eldest son of the ex-Prosecutor General of Russia Yuri Chaika.

CHAIKA, Artem Yuryevich (b. 1977) graduated from the law faculty of Irkutsk State University in 1977. In 1998, he was admitted to the Moscow City Bar Association. In 2002, he defended his Ph.D. thesis. In 2003, he became an attorney at the Chaadaev, Kheifets and Partners Bar Association. Since 2014, he has been a tax resident of Switzerland.

The Chaika family clan is one of the most vivid and cynical examples of the criminal-corruption nature of the authoritarian regime in Russia under Putin since not just an official participated in the formation of this business empire, but the highest state official responsible for the rule of law, the Minister of Justice and Attorney General.

Artyom Chaika is the main owner and manager of financial resources of the business structure, whose annual turnover, according to Forbes, is about $200 million.

Information about his connections with an organized crime appears from time to time. So, in March 1999 racketeers from Ingushetia Ibrahim Yevloyev and Khunkar Chumakov were detained on the Rublevo-Uspensky highway, who traveled by car given to them by Artem Chaika by the power of attorney; they also had a special pass prohibiting the search of vehicles in the name of Deputy Prosecutor General Yuri Chaika. Heroine, a revolver and a grenade were seized from the detainees. The court found Yevloyev and Chumakov guilty of extortion and robbery and sentenced them to imprisonment for 6 years. The court did not investigate their relationship with Artem Chaika.

In 2002, according to Novaya Gazeta and the Anti-Corruption Fund, Artyom Chaika and his people took control of the Board of the Verkhnelensky Shipping Company (VLP). A few days after the director of the VLP Nikolai Palenny had announced in an interview the raider seizure and involvement of Artem Chaika’s structures in this, he was found dead.

In 2009, the name of Artyom Chaika appeared in a story with an attempt to raider capture of the Municipal Unitary Enterprise Serpukhov Subsoil. The head of the Serpukhov district, Alexander Shestun, said that prosecutors and their representative, businessman Ivan Nazarov, were demanding $2 million from him and the appointment of “their person” to the post of director of the enterprise. Otherwise, he was threatened with criminal prosecution. According to a secret witness, who gave testimony in another case in 2011 about underground casinos in the Moscow region, prosecutors expected to receive contracts for the supply of sand and gravel for the construction of a new ring road in the Moscow region and the Serpukhov subsoil was mining sand and gravel. According to the witness, “Artem Chaika, the son of the Russian Prosecutor General, was interested in this matter.” Shestun recorded a video message to the then-President Dmitry Medvedev, appealed to the FSB and the Prosecutor General’s Office, but the criminal case was refused.

During the investigation of the resonant “gambling case of prosecutors,” the name of Artem Chaika also popped up. During the trial, the information appeared that “Ivan Nazarov, a suspect in the organization of underground gambling business, and the son of the prosecutor general, are close friends and have also corruption ties.”

One of the main sources of welfare for the sons of the Prosecutor General is Russian Railways. In 2014, Igor Chaika’s company became the minority owner of the country's largest manufacturer of sleepers. At the same time, Artyom Chaika acquired Berdyaus, a major supplier of crushed stone for Russian Railways, from businessman Sergei Vilshenko, promising to pay him $80 million. Then Russian Railways sold him a controlling stake in the First Aggregate Company, extending the deadline for accepting documents for the auction and not allowing The National Non-Metallic Company (NNK), the largest in the industry, in the auction. When the leadership of the NNK tried to challenge this decision in court, a criminal case was opened against Vilshenko and several company employees. As a result, Chaika did not pay the former owner of the company either $80 million or 20% of the shares.

Artem Chaika’s companies have repeatedly won public procurement tenders due to the removal of competitors by the law enforcement agencies. For example, in 2014, Artem Chaika's company Siberian Element-Rent K won the bid for a multi-billion-dollar government order for the supply of sand for road repair, after its main competitor Mostovsky Quarry suddenly had problems with the prosecutor's office and the company lost its license.

In 2015, Alexei Navalny’s FBK released the investigation film Chaika, in which he presented a large-scale picture of the criminal and corruption ties of the Chaika clan, confirming the accusation that “Artem and Igor earned tens of millions of dollars using the ties with friends and subordinates of his father, the Prosecutor General of Russia Yuri Chaika. For the past 15 years, they have been controlling legal and illegal businesses throughout Russia, extracting a profit sufficient for investments of any size.”

In June 2016, the name Artyom Chaika was replaced with the LSDU3 encoding in the Russian Federal Register.

In 2017, Artyom Chaika was included in the Magnitsky List as part of the “new regime against human rights violators and corrupt officials around the world,” introduced by the Donald Trump administration. The US Treasury Department considered that “Artyom Chaika used his father’s position and capabilities to dishonestly obtain state property and state contracts, as well as put pressure on competitors.”