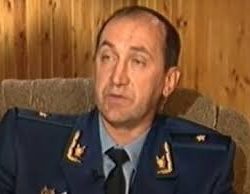 Senior Investigator for Particularly Important Cases of the General Prosecutor's Office of the Russian Federation, State Counselor of Justice of the 3rd class (Major General of Justice)

In the 1990s, according to open sources, Yuri Burtovoy was an employee of the Danilovsky District Department of Internal Affairs, served as an investigator for particularly important cases of the Zelenograd Prosecutor's Office; later he took the post of Investigator for Particularly Important Cases under the chairman of the Investigative Committee of the General Prosecutor's Office of the Russian Federation.

Investigator of the General Prosecutor's Office Yuri Burtovoy was one of the central figures in the criminal prosecution of the main co-owners of Yukos. According to the testimony of Russian and international human rights defenders, public figures, and lawyers, the prosecution of the defendants in the case was politically motivated and associated with numerous violations of Russian and international law.

In particular, in 2003, Alexey Pichugin, the head of the internal economic security department of Yukos Oil Company, was brought by the prosecution as a witness to testify. During the investigation, law enforcement officers repeatedly put pressure on the witness and used prohibited methods to obtain the necessary testimony from him. So, on 07/14/2003, during his detention in the Lefortovo FSB pre-trial detention center, A. Pichugin was taken by two unknown persons, presumably FSB officers. These people injected A. Pichugin with an unknown substance in the interrogation room and then arranged a six-hour interrogation for the witness, who was in oblivion.

The defendant’s lawyers demanded an immediate medical examination. However, despite the sharp deterioration in Pichugin's health that followed the “interrogation” (memory lapses, hallucinations, headaches, etc.), the head of the investigation, Yuri Burtovoy, refused to conduct an immediate medical examination of Pichugin for the use of psychotropic drugs. The fact of application of psychotropic substances to the person under investigation violates the requirement of the European Convention for the Protection of Human Rights and Fundamental Freedoms (“no one should be subjected to torture or inhuman or degrading treatment or punishment”), as well as the Constitution of the Russian Federation, Art.21.

In August 2003, Yuri Burtovoy summoned Alexey Pichugin's confessor to the General Prosecutor's Office, which is a direct violation of Federal Law No. 125 “On freedom of conscience and religious associations,” as well as the Code of Criminal Procedure of the Russian Federation, the Code of Civil Procedure of the Russian Federation, etc. In September 2005, Yuri Burtovoy visited the TV program Moment of Truth, in which he spoke about the “gang” organized by Pichugin at the order of the former vice-president of YUKOS, Leonid Nevzlin. Yuri Burtovoy violated the principle of the presumption of innocence and the principle of equality of arms by these actions, but the authorities did not find any violations of the rights of the accused in them. Due to the actions of the investigator, Pichugin had to abandon the jury trial.

According to the testimony of lawyers and Pichugin himself, in the course of the criminal trial, the prosecution repeatedly offered him to conclude a deal with the investigation and put pressure on him to obtain testimony against the co-owners of YUKOS, Leonid Nevzlin, Mikhail Khodorkovsky, and others, while not hiding from him the fact that the case is a political one and that otherwise, he will receive a life sentence. In all cases, Pichugin did not give his consent to give false testimony. The fact of pressure/coercion is confirmed by the testimony of Gennady Tsygelnik. During the trial against Nevzlin, Tsigelnik retracted his testimony, making the following statement: “I incriminated Pichugin and Nevzlin at the request of the investigators of the General Prosecutor's Office Burtovoy, Bannikov, Zhebryakov, and operative Smirnov. They promised me protection and the minimum term, but they gave me the maximum.”

According to human rights defenders and legal experts, the accusation against Pichugin was based on the falsification of evidence with direct disregard of any facts that did not fit into the concept of the accusation. The investigation, led by Yuri Burtovoy, was carried out with many violations of Russian and international law and caused outrage among the public and the expert community. Nevertheless, the courts and the General Prosecutor's Office of the Russian Federation ignored the repeated demands of Pichugin's defense to dismiss Burtovy from the case, complaints of gross violations of procedural law, and testimony of witnesses about the use of physical and psychological violence against them. This indirectly confirms that the criminal proceedings against all the participants in the Yukos case were initiated for political reasons.

In 2019, Yuri Burtovoy took over the criminal case against the governor of the Khabarovsk Krai Sergei Furgal, which, according to independent experts, also has a trumped-up nature. Based on the testimony received from the defendants involved in the case (in particular, the investigators detained S. Furgal's business partner, Nikolai Mistryukov, and three other persons), Furgal was charged with a series of murders and attempts on the life of entrepreneurs that took place in 2004-2005 years on the territory of the Khabarovsk Krai and the Amur Region. The governor was also charged with organizing a criminal community.

In this regard, it should be mentioned that after the arrest of Mistryukov, his wife Natalya reported that while in the Lefortovo, the accused was systematically subjected to pressure so that he confessed his guilt and gave testimony “against other persons.” According to Mrs. Mistryukova, lawyers were not allowed to visit her husband, he was deprived of sleep and threatened. As a result, Mr. Mistryukov, if he began to cooperate, then “without giving an account of his actions.” It is indicative that, as in the case of torture against suspects and witnesses in the YUKOS case, the prosecutor's inspection did not find any violations by the actions of the investigation and operational services.

In 2020, Sergei Furgal was arrested and sent to Moscow, where Yuri Burtovoy charged him with two murders and attempted murder of an entrepreneur. According to media reports, lawyers were not allowed to visit Furgal and all his correspondence was seized, which violates the legislation of the Russian Federation. Furgal did not admit his guilt. According to independent media outlets, the investigation against the governor was inspired by the Kremlin and is part of a plan drawn up long ago. So, according to Kommersant, the events around Furgal were connected with his political activities and the fact that the Kremlin was extremely annoyed with the results of the 2018-2019 elections when representatives of the LDPR party headed the region and pushed United Russia to the periphery. Besides, the rating of Sergei Furgal in the region exceeded the rating of Vladimir Putin. Despite belonging to the “systemic” opposition, Mr. Furgal has repeatedly spoken out critically on topics sensitive to the Kremlin, in particular, he condemned corruption, the relations between the federal center and regions, pension reform, and others.

According to one of the versions, the arrest of Furgal is connected with the business interests of persons belonging to Putin's inner circle, the Rotenberg brothers. The Rosenbergs were interested in the possible large-scale construction of a bridge to Sakhalin, for which the Amurstal plant (co-owner Sergei Furgal, his wife, and Mr. Mistryukov) is needed as the closest and cheapest steel supplier.