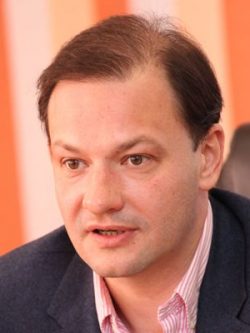 BRILEV, Sergey Borisovich (b. 1974) is a Deputy General Director of the state-owned Rossiya TV channel on special information projects, anchor of the Vesti on Saturday newscast.

Propaganda work in favor of the Putin regime, corruption.

Back in 2005, the Kommersant observer Arina Borodina noted that a distinctive feature of Sergey Brilev’s TV programs was the absence of any criticism of President Vladimir Putin. The observer also drew attention to the fact that the newscasts Vesti Nedeli and Vremya (on Channel One) repeatedly provided a uniform informational agenda: they were identical in topics and assessments of various events, and they invited the same speakers to comment on the events. According to Arina Borodina, this may mean that the topics of these programs were coordinated in advance with the Kremlin by either Brilev himself or the heads of TV channels.

In November 2018, the Anti-Corruption Foundation (FBK) published an investigation claiming that Brilev and his wife Irina have British citizenship. Besides, they are the owners of an apartment in London worth £700,000. The FBK investigation also called Sergey Brilev one of the main Putin’s propagandists, who never gives any negative information about either the President or the Russian government as a whole. In particular, Blirev’s newscasts Vesti on Saturday completely ignored mass rallies against highly unpopular pension reform, unprecedented protests in Ingushetia, and exposure of GRU employees involved in the poisoning of the Skripals in Salisbury.

Brilev also entered public councils under the Ministry of the Interior and the Ministry of Defense bypassing the law. Back in 2011, the President of Russia forbade persons with foreign citizenship to be members of such councils by his decree (one can be in a public council on the same grounds as in the Public Chamber, i.e., the person cannot have a second passport).