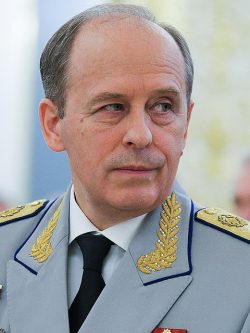 Director of the Federal Security Service of Russia (2008 — to date)

Bortnikov completed the process of transforming the FSB into one of the main punitive bodies of the Putin regime. FSB officers, led by Bortnikov, assisted Putin to usurp power, destroy political competition in the country, free media, independent parties, and public associations, and continue to carry out political persecution of dissenters, opposition members, and civic activists. Bortnikov headed the FSB during the five-day war with Georgia in 2008, which ended with the occupation of Georgian territory. He was also one of the initiators and perpetrators of the annexation of Crimea and the war in the southeast of Ukraine. Led by Bortnikov, FSB officers are carrying out repressions against Crimean Tatars in the annexed Crimea, who are being massively harassed, abducted, searched, detained, arrested and sent to captivity on trumped-up FSB cases. Under the leadership of Bortnikov, the FSB officers launched a campaign to combat religious minorities in violation of the right to freedom of conscience and religious associations. The Jehovah’s Witnesses were particularly pressured, whose main religious organization was recognized as extremist and banned in Russia, and thus all its followers became potential extremists. They are persecuted throughout the country, detained, tortured, charged with participation in an extremist organization.

The FSB, led by Bortnikov, is fabricating criminal cases against opposition activists, creating, among other things, “extremist communities” by their own undercover agents, as was in the “New Greatness” (Novoye Velichiye) case. FSB uses torture as a daily routine, getting necessary evidence and falsifying “extremist” cases, as it was in the “The Network” (Set’) case. Bortnikov never condemned the actions of his subordinates, did not stop the falsification of criminal cases and torture. At the same time, Bortnikov publicly justified the mass repressions of the predecessors of the FSB in Soviet times (KGB, NKVD, Cheka). Therefore, he consciously bears responsibility for the establishment of a dictatorial regime under President Putin. In the summer of 2014, the European Union and Canada imposed sanctions against Bortnikov for Russia's military intervention in Ukraine.

The True Role of the FSB in the Ukrainian Crisis

Imprisoned for Their Faith

How a Teenage Girl’s Chat Group Became an FSB Snare