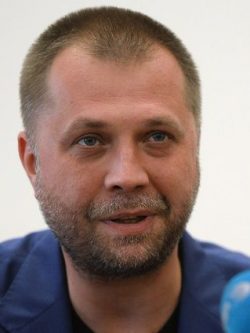 One of the former leaders of the pro-Russian militants/terrorists in Eastern Ukraine. The head of the “Union of Donbas Volunteers”. The first leader of the occupied part of the Donetsk region of Ukraine.

BORODAI, Alexander Yuryevich (b. 1972) is a Russian political consultant close to the Kremlin who was one of the main actors of the conflict in Eastern Ukraine. Born in Moscow, in 1992, as a student, he took part in a military conflict in Transnistria and in 1993 bloody clashes between Parliament and President supporters in Moscow. In 1994 he graduated from the Philosophy Faculty of Moscow State University. From late 1993 to June 1994, he worked as an expert at the Russian Reform Fund. Since 1994, he worked as a war correspondent for RIA Novosti state media holding, covered the first Chechen war. Since 1996, he began writing for the Soviet-revanchist newspaper Zavtra (‘Tomorrow’) and was its military observer. From the late 1990s, he participated in several election campaigns as a political consultant. In particular, he worked for the Party of the Regions of Ukraine. Besides, he advised businessman Konstantin Malofeev and represented his investment fund Marshall Capital.

In 2002, Borodai, reportedly, was appointed deputy director of the FSB for information policy and special projects. He rejects this information. However, in early 2014, Alexander Borodai participated in the illegal annexation of Crimea by the Russian Federation and became an adviser to the occupation administration of Crimea. The following month, together with Igor Girkin (Strelkov), he appeared in Sloviansk captured by Girkin’s militants, and a month later, on May 16, 2014, he was appointed “Chairman of the Donetsk People’s Republic (DPR) Council of Ministers”. The next day Borodai said that the authorities of the self-proclaimed republic are preparing a request to the Russian Foreign Ministry to let them join Russia or deploy Russian military bases on its territory. He also said that the same team works in Donetsk, Luhansk, and Crimea. In August 2014, he resigned from his post. In August 2015 he headed the “Union of Donbas Volunteers” created in Russia. The Ukrainian Prosecutor General’s Office accuses Borody of the violent overthrow of power, violation of the territorial integrity of the country and the creation of a terrorist organization. Since July 2014, he is on the US sanctions list.

Alexander Borodai is living evidence of the direct participation of Russia in fueling and maintaining an armed conflict in Eastern Ukraine. His biography, actions, and words directly refute the popular propaganda myth of the “civil war in Donbas” while in reality, it is one-sided armed aggression of Russia against Ukraine. Alexander Borodai is responsible for numerous killings, torture, organizing terrorist attacks and other large-scale violations of internationally recognized human rights in the occupied territories of Ukraine. For a long time before the events of 2014, Boroday had close contacts with the FSB, the Presidential Administration and the structures of the notorious businessman Konstantin Malofeev. He now continues to influence the situation in and around pseudo-state entities in Eastern Ukraine, and also has ambitions in the domestic political field, in Russia.

For the first time, Borodai attracted media attention in April 2014 after the recorded phone calls between former FSB officer Igor Girkin (Strelkov), one of the leaders of pro-Russia militants, from captured Sloviansk were made public. “Sasha” (as it turned out - it was Borodai) promised “Strelok” a direct inclusion on the Russian propaganda channel LifeNews, guaranteeing a high-quality story about the capture of the Ukrainian city. Later it turned out that Girkin and Boroday were old friends and together collaborated with Zavtra newspaper. Boroday admitted that he paid Girkin large sums of money to support military operations. It is noteworthy that he complained that in eastern Ukraine the level of support for joining Russia was much lower than in Crimea and he was not sure of the success of the Russian special operation. Reportedly, it was Konstantin Malofeev, closely associated with the Russian security services, who sponsored both Borodai and Girkin. Subsequently, Girkin and Borodai quarreled over the wasted money that Borodai allocated to Girkin to maintain a “civil” war.

In May 2014, bypassing any legitimate norms, Borodai was appointed a “prime minister” of the self-proclaimed “DPR”. He never denied being “related” to the leadership of Russia, in particular, with the former deputy head of the Presidential Administration and Putin’s current adviser, Vladislav Surkov. Surkov is considered the curator of the “DPR” and “LPR”, he negotiated a peaceful settlement in the Donbas with US Special Representative Kurt Walker. In 2019, the Joint Investigation Team (JIT), which is investigating the downing of a Malaysian Boeing in Eastern Ukraine, published recordings of conversations between Borodai and Surkov and with representatives of the “DPR”. In a conversation, Surkov asked Borodai to give “an Antyufeyev” a high administrative post in the “DPR”. A week after the conversation, Borodai announced that a person named Vladimir Antyufeev would be his first deputy. Another record, with Borodai’s assistant, indicates that the list of candidates for the “DPR” government was approved in Moscow. In another conversation, Boroday said that he “obeys orders and defends the interests of only one state, the Russian Federation”.

In the summer of 2015, returning to Moscow, Boroday founded the “Union of Donbas Volunteers” (UDV), uniting Russian mercenaries who fought in Eastern Ukraine. According to him, it “includes many passionate people united by the idea of all-Russian patriotism and fidelity to incumbent President Putin”. During the mass protests in Moscow in the summer of 2019 against the non-admission of independent candidates to the elections to the Moscow City Duma, according to Meduza, the Presidential Administration intended to use his organization against protesters. In the video of August 10, Boroday did not exclude the participation of the UDV “in domestic political processes”: if “the protesters <...> go beyond the legal situation”, then, “of course, we will be entitled to enter the game. <...> And then our dear all these boys in pink-blue trousers, who now go to rallies, must understand one simple thing: that they need to worry very much for their safety”.

A Ukraine Secessionist from Moscow Builds Greater Russia, One Province at a Time