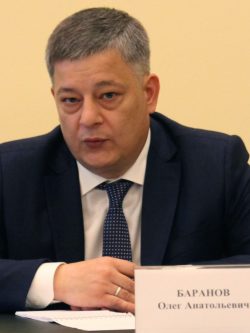 Head of the Main Directorate of the Ministry of Internal Affairs for the city of Moscow.

Abuse of power, connections with the organized crime groups.

Oleg Baranov stated that the beating of those detained at opposition rallies in Moscow was justified. Baranov, speaking on March 10, 2021, with a report on the activities of the internal affairs agencies for 2020 at a meeting of the Moscow City Duma, noted that police officers used force during the dispersal of unauthorized rallies legally. According to Baranov, the police acted legally on January 23, 31, and February 2, 2021, and the policemen used physical force, sambo techniques, and special equipment, which are allowed in the suppression of offenses.

The name of Oleg Baranov also appears in several high-profile criminal cases. So, for example, according to media reports, it was he who gave the command to his subordinates to find any reason to neutralize the Police Ombudsman project and to jail its creator, former police officer Vladimir Vorontsov. It was Baranov's officers who carried out the whole complex of moral and psychological pressure on him, forced him to give the necessary testimony. Over the past three years, Vladimir Vorontsov has occupied a rather unusual niche in the investigations of corruption and nepotism in the Ministry of Internal Affairs, for which he was pressured by any means, and eventually, a criminal case was opened. There are fourteen episodes in the Vorontsov case, half of which concern “insulting a representative of the authorities.” The most serious ones are connected with extortion of money from two police officers who send their intimate photographs to Mr. Vorontsov.

Oleg Baranov also took part in the scandalous case of Ivan Golunov. It was he who was instructed to sort out the situation with the detained Meduza journalist by Moscow Mayor Sergei Sobyanin. Baranov took this matter under his full control. As it became known from the media, the goal for the Golunov forgery was not to replace the head of the anti-drug agency, but in the current situation, the forces on the sidelines decided to use the opportunity. And, according to the Dvuglav telegram channel, the main beneficiary in the Golunov case was Interior Minister Vladimir Kolokoltsev. He removed two generals whom he “could not stand” (but before that he could not touch them because of high patrons). As a result, the head of the Ministry of Internal Affairs Kolokoltsev asked the president to dismiss two generals: the head of the Internal Affairs Directorate for the Moscow police, Major General of Police Andrei Puchkov, and the head of the Drug Control Directorate of the Moscow police, Major General of Police Yuri Devyatkin. One of these generals was a candidate to replace the head of the Moscow police, Oleg Baranov, who is close to the minister. However, it remains a mystery why Baranov did not receive the post of one of the dismissed generals.

Baranov and Kolokoltsev had known each other for a long time. It was their personal acquaintance that determined the candidacy of the capital's sheriff. The Minister of Internal Affairs knew Baranov from the early 1990s for operational work in the Moscow Criminal Investigation Department, and later, already in the 2000s, in the divisions of the Office for Combating Organized Crime. It is believed that scandals in the Moscow police in 2016 caused the resignation of Anatoly Yakunin from the post of head of the Moscow police, and with the personal participation of Vladimir Kolokoltsev. Having come to the post of head of the Moscow police, Baranov therefore first of all began to get rid of the team of his former boss Yakunin, who moved to the central office of the Ministry of Internal Affairs. Thus, personnel cleansing took place in the metropolitan police.