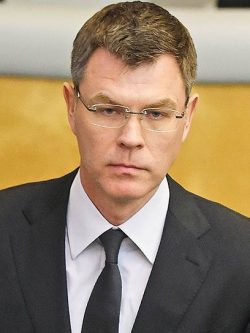 Restriction of human rights and freedoms.
Throughout his entire career in the Prosecutor General’s Office and the Ministry of Justice of the Russian Federation, Dmitriy Aristov was a mediocre and incredibly insensitive public servant, having perfect accomplishment in several missions. Ever since he became Deputy Minister of Justice, in December 2016 in the Russian State Duma, Mr. Aristov presented a draft bill of live courtrooms proceedings’ broadcasting restrictions in the media and the Internet. The bill was adopted and came into force a year later. The Code of Criminal Procedure was revised, which led to an obligatory court’s permission of the live proceedings’ broadcasting. Judges were also permitted to restrict broadcasting in time, an indication of their seat, ‘taking into account a personal opinion of the participants’. Damir Gainutdinov, the lawyer of the international human rights group Agora, stated that this step was ‘the most repressive law of penal procedure, adopted in the late years’.
After Aristov’s appointment as the Federal Bailiffs Service’s Director, the total number of citizens not permitted to travel abroad increased significantly. Thus, on New Year’s holidays 2018-2019, more than 3 mln. Russian citizens, due to their debts, failed to leave Russia. According to the FBS’ official website, the total number increased by 36.7 % than the previous year. Under Russian migration rules, a foreign trip could be denied if a citizen has housing and public utility debt exceeding 30 thousand roubles, or child support and Alimony debt exceeding 10 thousand roubles. As Dmitriy Aristov stated in October 2018, the total year number of no-fly debtors increased by 62% and was about 6 mln. citizens, which is a record-breaking indicator since open borders’ policy beginning. It is noteworthy that FBS’ Director Dmitriy Aristov, during the conference entitled The Court of 21st Century - Technologies in the Service of Justice, prided himself upon bailiffs’ time reduction in inclusion and indicating a debtor in a so-called no-fly list.
The most scandalous case, concerning the debtor’s departure ban, occurred in November 2018. On 15th November one of the Russian opposition leaders, Alexei Anatolievich Navalny, was going to visit the European Court of Human Rights in Strasbourg for hearings on illegal arrests and prison detentions. On 13th November Mr. Navalny arrived at the airport, where the customs service banned his departure. The main reason for banning was unpaid fine on Kirovles court case – the amount of fine exceeded 2 mln. roubles. On the same day, Navalny paid the entire amount but ultimately failed to leave Russia. Meanwhile, official representatives of the Anti-Corruption Foundation stated that the bailiffs’ decision was illegal due to the late mail sending and incorrect text of the document. Mr. Navalny took legal action against bailiffs and won a lawsuit. In early December the Court of Kirov recognized this ban of Navalny’s departure illegal.
Taking into consideration that the authorities of modern Russia regularly impose politically-engaged administrative measures (especially fines) against opposition civil activists, the Federal Bailiffs Service acts as one of the main repressive executors of the authoritarian regime, human and civil rights, and freedoms restrictor.