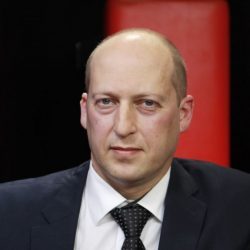 AGRANOVSKY, Dmitry Vladimirovich (b. 1971) graduated from the Moscow Regional Polytechnic and the Law Faculty of Moscow State University. In 1996, he began his legal career as an attorney at the Moscow Regional College of Lawyers. Since 2008, Dmitry Agranovsky has been working at the Moscow Bar Association “Liptser, Stavitskaya, and Partners.” In 2009, he became director of this organization, which specializes in criminal cases and the cases for the European Court of Human Rights.

Dmitry Agranovsky gained fame as a defender of many political activists, mainly leftists. Agranovsky represented members of the National Bolshevik Party who participated in the seizure of the public reception office of the President of Russia in 2004, a member of the Left Front Leonid Razvozzhaev, political prisoners in the Bolotnaya Square case Vladimir Akimenkov and Yaroslav Belousov, and many others. Since 2014, he has been representing pro-Russian militants captured in Ukraine.

He joined the Communist Party in 1994, and since 1997, he was re-elected five times as a member of the city council of Elektrostal. He is an assistant to the First Deputy Chairman of the State Duma, Ivan Melnikov. Agranovsky supported the “Communist Party of the Russian Federation and others against Russia” claim to contest the election results to the State Duma in 2003 in the European Court. He is an op-ed writer for the newspapers Soviet Russia and Zavtra. Since February 2013, he has been hosting the Point of View program on the TV channel of the Communist Party of the Russian Federation.

As the dictatorship in Russia became tougher, the “red lawyer” Dmitry Agranovsky gradually drifted from protest to cooperation with the government. Since 2012, and especially after Euromaidan in Ukraine, this became a position similar to the ones of other “red” propagandists of the Putin regime. Today, he is exposed as a person collaborating with the Russian special services against the interests of the opposition. He openly engages in anti-Ukrainian propaganda and advocates repression against the opposition, which supported the Ukrainian revolution.

The common interests of Agranovsky and the Kremlin were manifested in the defense strategy of the Bolotnaya Square case prisoner Leonid Razvozhzhaev, who was abducted by the Russian special services in October 2012 in Kyiv and soon delivered to Moscow. His attorneys were Mark Feigin, Dmitry Agranovsky, and Violetta Volkova, but soon Mark Feigin was suspended from the case. According to him, the investigation put serious pressure on Razvozzhaev, which Agranovsky and Volkova condoned. Three years later, these fears were fully confirmed: in 2015, NTV released the propaganda film Pathology of Protest with Leonid Razvozzhaev as the main speaker. As a result of his “processing” by Agranovsky and Volkova, Razvozzzhaev blamed the leaders of the liberal opposition for police provocation and forceful dispersal of the protest on May 6, 2012, on the Bolotnaya Square and for allegedly betraying leftist activists, including Razvozzhaev. Agranovsky himself, more than once in the process, expressed the stance that the authorities must have jailed Ilya Ponomarev, Boris Nemtsov, Ilya Yashin, and Alexei Navalny. However, the “surrender” did not help Razvozzzhaev go out on parole, as he was released only in the spring of 2017.

Agranovsky most eloquently proved himself as a pro-Kremlin guard due to the events in Ukraine. When the Berkut riot police shot protesters in Kyiv, he complained about the softness of the Yanukovych administration: “This must be stopped in the most severe way. The Ukrainian authorities want to show what is happening, and they are not acting decisively,” he said on February 19, 2014, in an interview with the Russian propaganda channel LifeNews. After the victory of the Euromaidan, he became extremely frank in his calls to crack down on the Russian opposition: “I hope the repressions will begin: I generally believe that after they took the position on Ukraine, all participation of people with such views in politics should be excluded. And if the pro-Maidan opposition is banned in our country, I will only be glad.” Agranovsky openly opposes the territorial integrity of Ukraine and fully supports the pro-Kremlin puppet entities DPR and LPR.

The Communists' penchant for bloodletting is no secret to anyone, but even here Agranovsky cannot stop. Besides the Russians and Ukrainians, he has also attacked Israelis: “The Israelis must be crushed - this is such a bunch of bandits,” he once wrote in his LiveJournal. It is noteworthy that, having agreed on cooperation with the authorities, Agranovsky ceased to be shy in expressions. Unfortunately, Agranovsky’s rhetoric remains within the normal for the Russian authorities.