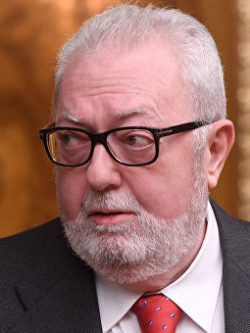 Russian-oriented politician, the European agent of Putin’s regime.
Former President of Parliamentary Assembly of the Council of Europe (PACE)
Since 1993 - Member of the Spanish Congress of Deputies, representing Valencian Autonomous Community.
Mr. Agaramunt holds an honorary degree Doctor Honoris Causa, given by the Russian Presidential Academy of National Economy and Public Administration under the President of the Russian Federation - RANEPA.
In April 2017 he visited Syria in the Russian delegation, arriving by the plane of the Russian Ministry of Defense. Such a diplomatic step provoked an expression of distrust by the Bureau of the Parliamentary Assembly of the Council of Europe. Agramunt’s visit to Syria was considered as a considerable achievement of Kremlin diplomacy and propaganda.
In 2017 deputies of the PACE expressed a vote of non-confidence to Pedro Agramunt due to his close cooperation with the Russian Federation and his visit to Syria, and deprived rights of an Assembly member for 10 years. Soon afterward, he voluntarily resigned.

During his PACE presidency, Pedro Agramunt stated that Crimea’s annexation was not a good enough reason for sanctions against Russia.
Complicity in propaganda and disinformation.