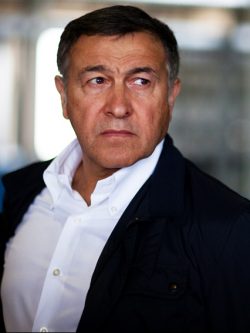 President and Owner of Crocus Group

AGALAROV, Araz Iskender oglu (b. 1955 in Baku) graduated from the Baku Polytechnic Institute with a degree in computer engineering in 1977. After receiving his diploma, he worked for six years at a research institute in Baku, and then at the Baku city committee of the Communist Party. From 1983 to 1987, he was a student of the Higher School of the Trade Union Movement of the All-Union Central Council of Trade Unions in Moscow (now the Academy of Labor and Social Relations). From 1988 to 1990, he worked in the research center of the All-Union Central Council of Trade Unions as a junior research fellow.

In 1987, he organized the Saffron cooperative, which traded in Russian souvenirs, sending them for export. Then the cooperative started importing computers. In 1989, together with his father-in-law Joseph Gril, he founded the Crocus International American-Soviet joint venture, which later became the Crocus Group. Since 1990, he has been holding an international exhibition of computer technology in Russia. Owning part of the Cherkizovsky market, Agalarov was able to accumulate funds for business development and acquired the business and criminal ties among the Azerbaijani diaspora.

Ties with the mafia, nepotism, illegal seizure of land, attempts to interfere in the US presidential election.

Araz Agalarov is one of the most influential leaders of ethnic diasporas in Russia and the “king of commercial real estate.” He owns gigantic retail space in Moscow and the Moscow region. He also actively participates in government contracts along with Putin's closest friends. In recent years, his name has been associated with the Kremlin's attempts to hack the servers of the US Democratic Party to influence American politics in the interests of the Kremlin. The sources of his wealth and influence may be of criminal origin.

The impetus in the career of Araz Agalarov was his share in the work of the Cherkizovsky market in the late 1980s and early 1990s. At that time, the Cherkizovsky market had a reputation as an extremely criminalized institution. There he met God Nisanov and Zarah Iliev, the owners of the Kievskaya Ploshchad company, with whom he would often collaborate in the future on business projects. Nisanov and Iliev had close ties with thieves in law Vagif Suleymanov, nicknamed Vagif and Zakhary Kalashov (Shakro Molodoy), who led the criminal world of Russia after the murder of Aslan Usoyan (Ded Khasan). In 2006, one of the Azerbaijani mafia leaders, the famous thief in law Ikmet Mukhtarov, was killed in Moscow as a result of the war between Chechen and Azerbaijani criminal clans. It is noteworthy that the Mercedes in which Mukhtarov was killed belonged to one of the co-founders of the Crocus International holding, Ikmet Mukhtarov, a close associate of Agalarov.

In 2005, Agalarov’s actions provoked another interethnic conflict. After he bought the Grand shopping complex in Khimki, the change houses of the old employees were removed, and the new Azerbaijani team leaders announced to the old employees that henceforth, the owner of the Grand was Azerbaijani, which meant that Azerbaijanis will establish rules. About 1,500 ethnic Russian employees were also reportedly dismissed from Crocus City, which is also owned by Araz Agalarov, and replaced by Azerbaijanis who had been working at the Cherkizovsky market.

In 2008, publications appeared on raider seizure of land from peasants and low-income residents of the Istra district of Moscow Region by Agalarov’s structures for the construction of an elite residential village and the largest golf course in Europe. Residents of the village of Voronino complained that “Crocus International employees exerted moral pressure on local residents, many of whom were already forced to sell their homes. The remaining ones were promised to experience unfavorable living conditions. People are simply “squeezed out” from their native places, and nobody cares about the four hundred year history of the village.”

In 2017, The New York Times reported that Araz Agalarov’s son, Emin, was an intermediary between lawyer Natalia Veselnitskaya, who allegedly offered Trump staff information that could harm Hillary Clinton's campaign, at a meeting in Trump Tower in New York on June 9, 2016. This was one of the episodes in the investigation of Robert Muller of Russia's interference in the US election. In 2018, the National Committee of the Democratic Party of the United States filed a lawsuit accusing the Agalarovs of involvement in a conspiracy to break into the party’s computer system. In the fall of that year, all commercial accounts of Agalarov companies in the United States were closed.

It is no secret that nepotism, criminal ties, and neglect of the institutions of a free and open society flourish in Putin's modern Russia, which ultimately affects the majority of the country's population. There are no social mechanisms to prosecute figures like Agalarov so far. Enjoying the support of the Kremlin and diaspora structures, they feel like kings of life in the middle of a poor and powerless country. The desire to make Russia free means the desire to affirm the equality of citizens in rights and before the law, regardless of social status.