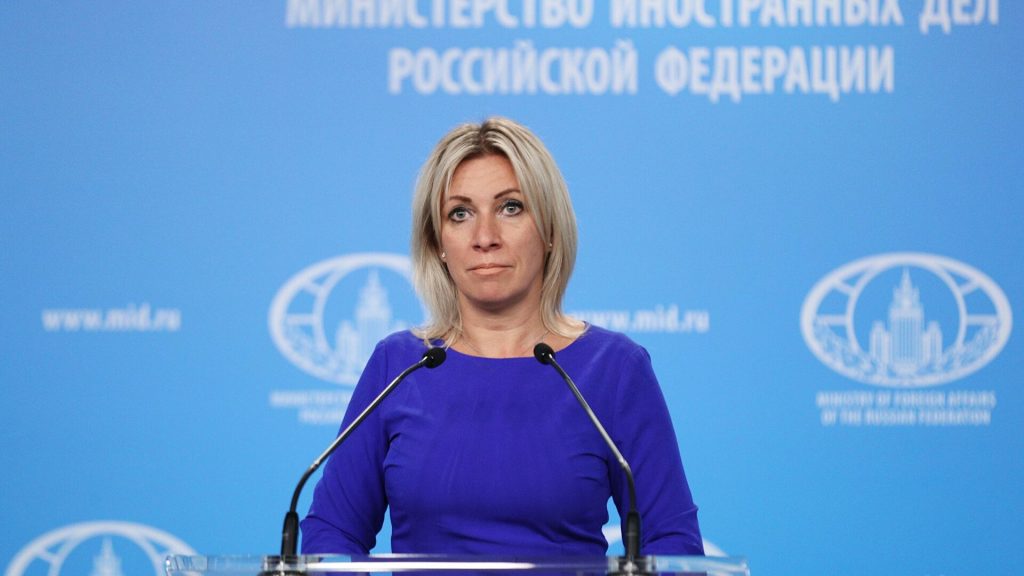 Russian Foreign Ministry spokeswoman Maria Zakharova has defended her country’s controversial labeling of some foreign-funded media as “foreign agents” by saying Moscow was “forced” to adopt the measure in response to actions taken by the United States.

The labeling of “foreign agents” has been interpreted by many civil society activists as another tool for the Kremlin to use to intimidate Russia’s political opposition, especially with parliamentary elections looming in September and the ruling United Russia party slumping in opinion polls.

“We were forced to do it to defend our journalists and our information space,” Zakharova said at a breakfast roundtable on the “foreign agent” law in St. Petersburg on June 3.

Zakharova was the featured speaker at the roundtable, titled Business Breakfast For Foreign Media Agents With Maria Zakharova, which was held within the framework of the 2021 St. Petersburg Economic Forum.

Andrei Shary, director of RFE/RL’s Russian Service, which has been labeled a “foreign agent” media outlet under the law, also spoke briefly via video link from Prague.

Shary said RFE/RL rejected the “foreign agent” designation and charged that “freedom of speech is quickly being restricted in Russia,” in part because of the law.

The same day as the forum, the business daily VTimes, which was designated a “foreign agent” last month, announced it will cease operations on June 12 because of “the risk of criminal prosecution of the publication’s employees with the possibility of their incarceration.”

The designation, the newspaper said in a statement on June 3, had also destroyed its business model and driven away advertisers and other partners.

When asked about the VTimes announcement, Zakharova said she was not informed about the matter, but added it sounded to her like “a purely financial matter.”

Russia’s so-called “foreign agent” legislation was adopted in 2012 and has been modified repeatedly. It requires nongovernmental organizations that receive foreign assistance and that the government deems to be engaged in political activity to be registered, to identify themselves as “foreign agents,” and to submit to audits.

In 2017, the Russian government placed RFE/RL’s Russian Service on the list, along with six other RFE/RL Russian-language news services, and Current Time, a network run by RFE/RL in cooperation with VOA. The Russian Service of VOA was also added to the list.

At the end of 2020, the legislation was modified to allow the Russian government to include individuals, including foreign journalists, on its “foreign agents” list and to impose restrictions on them. Several RFE/RL contributors were placed on the list in December 2020.

RFE/RL rejects the “foreign agent” designation and has refused to comply with the rules, so the agency has prepared hundreds of complaints against RFE/RL’s projects. When they go through the court system, the total fines levied could be more than $3 million.

RFE/RL has called the fines “a state-sponsored campaign of coercion and intimidation,” while the U.S. State Department has described them as “intolerable.” Human Rights Watch has described the foreign agent legislation as “restrictive” and intended “to demonize independent groups.”

RFE/RL has filed a complaint about the matter with the European Court of Human Rights.

Zakharova repeated the Russian government’s assertion that the creation of the register of “foreign agent” media in Russia was a response to a 2017 decision by the United States to compel RT to register under a 1938 law called the Foreign Agents Registration Act (FARA).

U.S. State Department spokeswoman Heather Nauert said at the time that FARA registration “is simply triggered when an entity or an individual engages in political activity.”

“When the United States tells someone to register under a foreign-agent requirement, we don’t impact or affect the ability of them to report news and information,” Nauert said. “We just have them register. It’s as simple as that.”

Courtney Austrian, the U.S. charge d’affaires to the Permanent Council of the Organization for Security and Cooperation in Europe (OSCE), told the council in March that “there is no equivalence between U.S. FARA legislation and Russia’s ‘foreign agent’ law.”

RFE/RL once had distribution agreements with nearly 100 radio channels inside Russia, but had lost them all by 2012 following a campaign of pressure by the authorities.

The U.S. decision to compel RT to register under FARA came after a January 2017 U.S. intelligence finding that RT and Russia’s Sputnik news agency spread disinformation as part of a Kremlin effort to influence the 2016 U.S. presidential election in favor of Republican candidate and eventual winner Donald Trump.