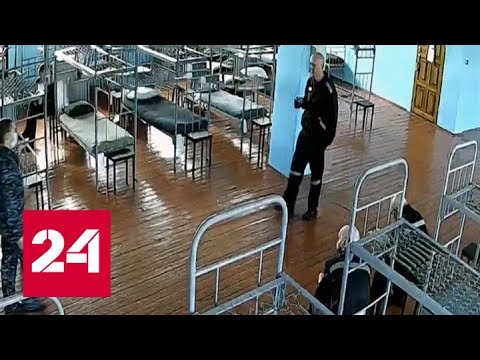 MOSCOW – Jailed Russian opposition politician Alexey Navalny has been moved to a prison hospital and tested for the coronavirus, Russian media reported. His hospitalization came Monday,  just hours after he released a statement on social media in which he alleged a tuberculosis outbreak in the prison and complained of a heavy cough and high fever.

Concerns over Navalny’s health have returned to the spotlight after he announced last week he was starting a hunger strike to gain access to what he insists is urgently needed medical care as he serves out a 2 ½-year sentence in a Russian prison 100 kilometers from Moscow.

“I have a right to ask for a doctor and access to medication. Yet stupidly, I’m receiving neither,” Navalny wrote in a message released on his Instagram account announcing the hunger strike.

Navalny, 44, also shared a handwritten letter he sent to the prison administration describing acute pain in his back that had spread to his legs, causing a loss of sensation.
Navalny said his ailments are linked to an August 2020 poisoning attack with a military-grade nerve agent that nearly took his life, and that he and Western governments blame on the Russian government.

The Kremlin has denied any involvement but also refused to investigate the incident —maintaining there is no definitive proof Navalny was ever poisoned.

The government has also deployed state media to Navalny’s prison to film reports that portray conditions at the penal colony as near ideal, and Navalny as seeking special treatment by faking his symptoms.

Maria Butina, a Russian national who was sentenced to 18 months in a U.S. prison in 2019 after confessing to operating as an undeclared Russian foreign agent, toured the prison last week with cameras in tow.

“Believe me, U.S. prison is much worse,” Butina said in a lengthy report broadcast on the Rossiya 24 channel.

On Tuesday, dozens of supporters traveled to the prison to demand Navalny be given access to adequate care. Met with police barricades, several demonstrators were detained, including Navalny’s chief physician, Anastasia Vasilyeva of the Alliance of Doctors.

“To leave a person in extreme pain, while in prison, without adequate access to pain relief, can be considered not only a violation of his rights, but also immediate torture,” their statement said.

“We fear for the worst. Leaving a patient in this condition … may lead to severe consequences, including an irreversible, full or partial loss of lower limb functions.”

On Monday, Navalny also insisted that a tuberculosis outbreak had swept through the prison infecting three of 15 inmates in his bunk ward.

In announcing he had come down with similar symptoms, Navalny joked that they might provide some dark relief.

“If I have tuberculosis, then maybe it’ll chase out the pain in my back and numbness in my legs,” he said in an Instagram post. “That would be nice.”

Navalny was sentenced in February to just over 2 ½ years for violating parole obligations dating back to a 2014 fraud conviction he argues was politically motivated to disqualify him from participating in Russian political life.
The parole violation charges appeared only after Navalny had spent months recovering from the poisoning attack in a German hospital. The action was widely seen as an effort by the Kremlin to strongly encourage the opposition figure to remain in exile.

Instead, Navalny announced he was returning home to Moscow, where he was promptly detained at the airport by police in January.

Following his conviction, it later emerged he would be serving out his sentence at the IK-2 facility in the town of Pokrov, a high-security prison known for imposing a strict regime of psychological pressure on prisoners, say former inmates.

In recent postings to his lawyers from prison, Navalny has detailed a grim existence aimed at breaking his will.
He described suffering from sleep deprivation “torture” as guards wake him up every hour throughout the night to document his whereabouts.

Other prisoners are banned from speaking with him or forced by prison authorities to inform on his every move.

Navalny has also been cited for repeat infractions, such as sitting up in bed 10 minutes early and wearing a T-shirt while meeting with his lawyer, which opened the path to him serving out lengthy periods of time in solitary confinement.

The Kremlin website later issued a statement without elaborating, saying Putin had explained what it called the “objective circumstances” of Navalny’s case.

The United States and its European allies have demanded Navalny’s release and issued sanctions against top Russian government officials and state entities involved.

The Kremlin has rebuffed Western demands and sanctions as attempts to interfere in Russia’s internal affairs.

It also insists any questions regarding Navalny’s treatment are to be directed to the prison authorities but assured his basic needs will be met.

Navalny’s detention upon his return to Russia sparked mass protests across the country and the arrest of more than 11,000 demonstrators.

After initially issuing a moratorium on further street protests amid the crackdown, Navalny’s team has since issued a challenge, promising to organize protests once 500,000 supporters have signed an online petition. The initiative was well over halfway toward its half-million goal.

But an independent poll by Russia’s Levada Center issued this week suggested Kremlin efforts to portray Navalny in a negative light were well-ingrained, with nearly half of Russians saying Navalny had been rightfully imprisoned. Just 29% saw his jailing as unjust, according to the results.

The poll also showed younger Russians far more supportive of the opposition figure. There were signs the state is taking few chances as it presses ahead with pressure on Navalny and his allies.

“I have no doubt that these criminal charges are tied to me and my activities,” he said in a Facebook post.

“I’m not going to lie,” he added. “For me, this is the most terrifying thing that could happen.”

Source: VOA
News
UK sanctions Russian airlines to prevent them selling landing slots 19 May 2022
Putin involved in war ‘at level of colonel or brigadier’, say western sources 19 May 2022
Vladimir Putin has said that by abandoning Russian energy supplies, Europe risked paying the most expensive energy prices in the world. 17 May 202217 May 2022
Opinion | How to Reinvigorate NATO and Deter Putin’s Aggression 17 May 202217 May 2022
Brussels plans to help EU countries confiscate assets frozen by sanctions 11 May 202211 May 2022
See all news
Home / News / Report: Jailed Russian Opposition Leader Navalny Hospitalized
© 2018-2022 The database “PUTIN'S LIST”