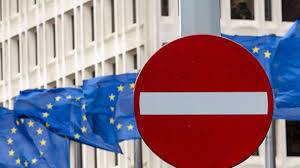 Germany, Sweden, and Poland are each expelling a Russian diplomat in a tit-for-tat move after Moscow’s expulsion last week of diplomats from the three EU countries for allegedly taking part in protests in support of Kremlin critic Aleksei Navalny.

The Foreign Ministry said Moscow’s decision to expel the European diplomats “was not justified in any way,” insisting that the German Embassy staffer had been acting within his rights under the Vienna Convention on Diplomatic Relations to “inform himself about developments on site.”

The Swedish and Polish governments made similar announcements.

“We have informed the Russian Ambassador that a person from the Russian Embassy is asked to leave Sweden,” Sweden’s Foreign Minister Ann Linde wrote on Twitter. “This is a clear response to the unacceptable decision to expel a Swedish diplomat who was only performing his duties.”

Poland’s Foreign Ministry said on February 8 that it had asked a worker at the Russian Consulate in the western city of Poznan to leave.

“The Foreign Ministry took the decision today in accordance with the principle of reciprocity and in coordination with Germany and Sweden to recognize an employee of the Consulate General of Russia in Poznan as persona non grata,” the ministry said on Twitter.

“Today’s decisions by Poland, Germany, and Sweden are unfounded, unfriendly, and are a continuation of the very series of actions that the West is taking with regard to our country and which we qualify as interference in our internal affairs,” spokeswoman Maria Zakharova told state channel Rossia 1.

Russia last week announced that diplomats from Sweden, Poland, and Germany personae non gratae for allegedly participating in a protest to support the Kremlin critic on January 23. The Swedish, Polish, and German governments have denied that their diplomats participated in the demonstration.

The February 5 announcement came during a tense visit by Josep Borrell to Moscow, where the EU’s top diplomat had an intense day of meetings with his Russian counterpart Sergei Lavrov, who called the EU an “unreliable partner.”

The coordinated retaliatory move by the three EU members came after the Kremlin on February 8 defended its decision to expel the European diplomats.

“The Russian side has shown clearly that it isn’t going to tolerate anything like this,” Kremlin spokesman Dmitry Peskov told journalists on February 8.

For his part, Borrell wrote in his blog on February 7 — a day after returning from Moscow — that an “aggressively-staged press conference and the expulsion of three EU diplomats during my visit indicate that the Russian authorities did not want to seize this opportunity to have a more constructive dialogue with the EU.”

Peskov declined to comment on Borrell’s statement, saying that he does not “presume to judge what could have influenced such an assessment.”

On February 2, Navalny was found guilty of violating the terms of a suspended sentence he received in connection with an embezzlement case that he has called politically motivated. The court converted the sentence to 3 1/2 years in prison. Given credit for time already spent in detention, the court said the Kremlin critic would have to serve 2 years and 8 months behind bars.

Navalny, 44, was arrested on January 17 after returning to Russia from Germany where he was treated for a nerve-agent poisoning that he says was ordered by Russian President Vladimir Putin, which the Kremlin has denied.

More than 1,400 people were detained by police in Moscow, St. Petersburg, and other Russian cities after the court ruling on February 2. More than 10,000 were rounded up by police during nationwide protests in more than 100 Russian towns and cities on January 23 and January 31.

Rattled by some of the biggest anti-government protests in years, Moscow has accused the West of hysteria and double standards over Navalny and has accused the United States and others of meddling in Russia’s internal affairs.

In addition to the Navalny case, relations between Moscow and the EU have been sorely strained by Russia’s 2014 annexation of the Ukrainian region of Crimea and its support for separatist formations waging a war against Kyiv in parts of eastern Ukraine, the EU’s rejection of a disputed presidential election in Belarus and its criticism of a brutal crackdown by the government of strongman Alyaksandr Lukashenka, and other issues.

With reporting by Reuters, AP, AFP, dpa, and TASS

Source: RadioFreeEurope
News
UK sanctions Russian airlines to prevent them selling landing slots 19 May 2022
Putin involved in war ‘at level of colonel or brigadier’, say western sources 19 May 2022
Vladimir Putin has said that by abandoning Russian energy supplies, Europe risked paying the most expensive energy prices in the world. 17 May 202217 May 2022
Opinion | How to Reinvigorate NATO and Deter Putin’s Aggression 17 May 202217 May 2022
Brussels plans to help EU countries confiscate assets frozen by sanctions 11 May 202211 May 2022
See all news
Home / News / Germany, Sweden, Poland Expel Russian Diplomats In Tit-For-Tat Move
© 2018-2022 The database “PUTIN'S LIST”